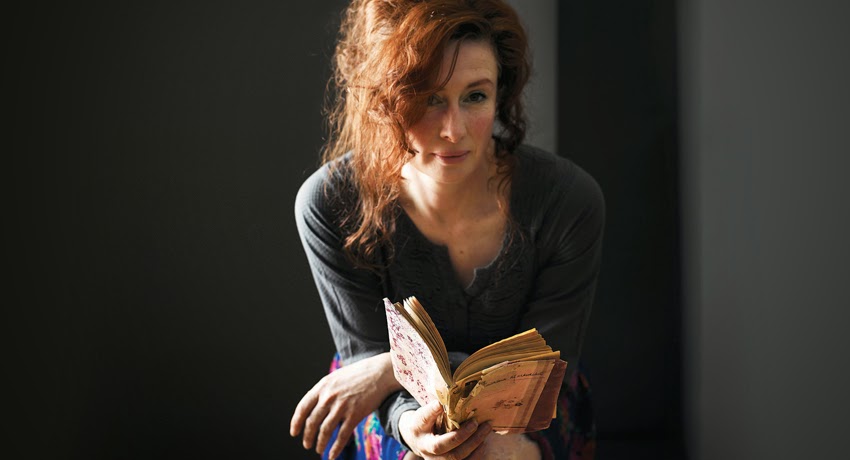 
My review of Eating Seals and Seagulls' Eggs by Caitríona Ní Mhurchú coming up just as soon as I scratch my retina with a rusty nail ...

Is there is a place in our hearts for Irish speakers, it's as rocky and precarious as a scene from the Great Blasket Island. Storyteller Peig Sayers's autobiography was one of the most widely distributed Irish language books and, as a result, became one of our most detested treasures. Writer and performer Caitríona Ní Mhurchú spoke Gaelic on a Dublin bus and was racially abused by a local woman in her 60s for it. The cúpla focal have become more the object for hateful scribbling in schoolbooks than as a resource to rediscover our past.

Understandably, if Sayers were alive she would be begrudged against generations of brats and vandals. It's appropriate of Ní Mhurchú then to write this spiny and unsentimental play that harks back to the home-place of both authors: the Great Blasket Island.

In Adam Gibney's visual design, modelling a sort of storage room of dated communication technologies, our connection to the island can only be glimpsed through scratched video recordings. Ní Mhurchú plays the bawdry Sayers, moving like a spider, with round coarse words rolling in her mouth. The kinship between both is facilitated by Louise Lewis who plays the role of Ní Mhurchú, a sparkling wig on her head indicative of postmodern pastiche.

It's undoubtedly a piece of contemporary performance, and in line with Ní Mhurchú's past avant garde collaborators such as Dead Centre, Desperate Optimists and Liz Roche. Structurally, it isn't as sound. Despite being strewn with manufactured seaweed and sprinkled with sand, the event becomes too preoccupied with the story of Sayers rather the atmospheric affect of an Irish reality bleak and desolate.

Posted by Chris McCormack at 5:41 AM