Mephisto, 'Eclipsed': Raise Up Your Hearts, You Washer Women! 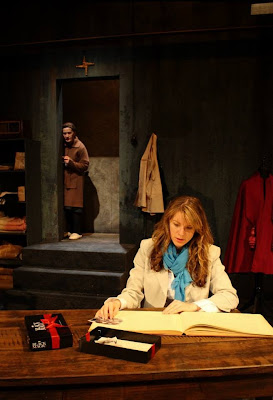 My review of Eclipsed by Patricia Burke Brogan coming up just as soon as I have tea and toast in the small pantry ... 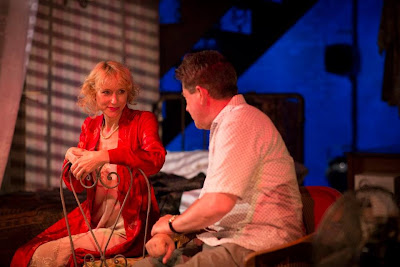 My review of A Streetcar Named Desire by Tennesse Williams coming up just as soon as I instill a bunch of drugstore Romeos with a reverence for Hawthorne and Whitman and Poe ... 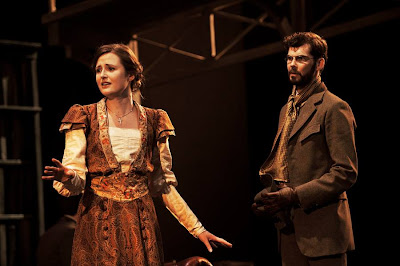 My review of Major Barbara by George Bernard Shaw coming up just as soon as the vulgarity of it positively makes me ill ...

Read more »
Posted by Chris McCormack at 4:16 PM No comments:

Dublin Fringe Gets Locked Out but Who Else is in this Year's Festival?

Raymond Keane's physical stylings from his performance in clown may just make him the man for Samuel Beckett's Act Without Words II. Photo: F. Sakauchi

We learn more about ANU Productions' city-wide installation of the Lockout that seeks to immerse audiences in the events of 100 years ago. Thirteen sees 13 interdisciplinary art events taking place across 13 days at various Luas stops, the conserved tenement at No. 14 Henrietta St (which was the site of Thirteen's prelude: Living the Lockout), Dublin Castle, Liberty Hall, Collins Barracks and other places. All events are free-ticketed.

The offering from the Spirit of the Fringe-commissioned Paperdolls is called Bunk - an aerial circus performance about the threshold between internal and external worlds, in other words: the bed.

It's very exciting to hear of the collaboration between avant garde director Sarah Jane Scaife and Raymond Keane on Samuel Beckett's Rough for Theatre One and Act Without Words II. I've held a suspicion that Keane with his physical stylings drawn from his performance in clown could be a formidable performer of Beckett's work, considering the playwright's own influences from Charlie Chaplin.

(Also, Keane's Barabbas colleague, the sweeping Bryan Burroughs, will be tearing up Beowulf in Bewleys Cafe Theatre, and Ruth Lehane performs in red nose in Ruth 66, which is about a clown's travels across America involving sex, drugs, the usual.)

On the creative winds of Human Child earlier this year, Collapsing Horse present their new play, this time for adult audiences: Distance From the Event by Eoghan Quinn. Starring John Cronin, this Irish noir/Sci fi hybrid follows an investigator looking to solve the disappearance of a human colony on a distant planet. Epic in scale, as is to be expected from this energetic company.

Plays also seem to be back at the Fringe. Genevieve Hulme-Beaman has been fantastic in everything I've seen her in, and her play, Pondling, about a schoolgirl searching for love might be a promising debut. The charming (and talented as hell) Janet Moran performs in Swing, a play about dance and nerves, written by Moran, Steve Blout and Gavin Kostick. Louise Melinn and Máirín O'Grady co-write The King's Feet, an absurdist play directed by Aoife Spillane-Hinks. Hopefully the attributes of these two fine writers - to present what is instantly recognisable from Irish life today - won't be lost in the exercising of the absurdist form. And John Morton's War of Attrition for Devious Theatre seems to be a vibrant tale about three young Irish people living in Dublin and the terror they wreak on each others lives.

Dick Walsh had audiences flinching in last year's a dangerman, and now he returns with Some Baffling Monster - a tale of a father and son's struggle for a farm presented in a form "monstrously Brechtian, maybe better than Brecht". Sounds like a tall order but don't be fooled: Walsh seems well voiced in contemporary performance styles.

A few of the performances which we glimpsed at THE THEATRE MACHINE TURNS YOU ON VOL. III are also in here, many of which share a theme of womanhood such as Sorcha Kenny's DOLLS, Louise Lewis's The Churching of Happy Cullen and Meadhbh Haicéid's MADONNA.

Oisín McKenna's spoken word performance Writer/Performer/Salesman (A New Play About Retail) was one of the highlights of THE THEATRE MACHINE, and now he presents GRINDR / A Love Story - a piece about gay relationships in the digital age.

Also: the street performers of Macnas will be transforming Meeting House Square into the magical world of Chaosmos; composer for theatre Denis Clohessy presents the music-led revenge tale Animus (which, if as good as his usual compositions, could be marvelous); Bush Moukarzel presents a curious and extraordinary-sounding performance called LIPPY inspired by a real life suicide pact in Kildare between an aunt and her three nieces; and Brian Flemming makes a welcome return with more tales of the Irish in Africa in Have Yis No Homes to Go To.


What will you be seeing in Dublin Fringe Festival 2013?

Posted by Chris McCormack at 6:59 PM No comments:

Pan Pan, 'Embers': The Old Man and the Sea 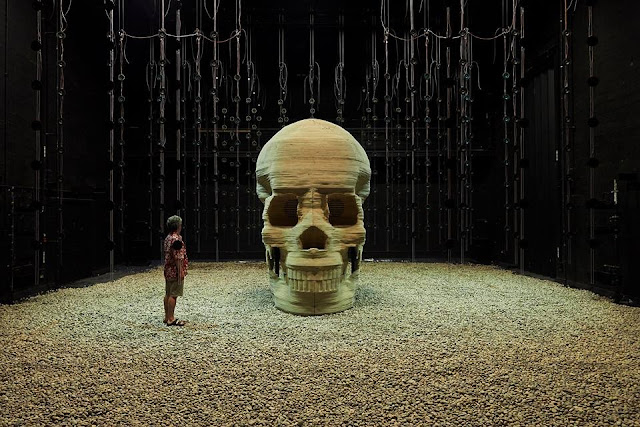 My review of Embers by Samuel Beckett coming up just as soon as I carry a gramophone about with me ...

Read more »
Posted by Chris McCormack at 6:21 AM No comments: 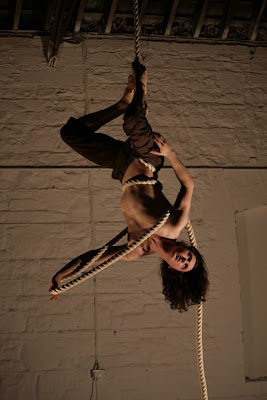 My review of Landfall by Niamh Creely coming up just as soon as I borrow a pair of pliers from my neighbour ...


Yesterday I teamed up with my mother for the Big House Festival - the cultural carnival of music, theatre and dance that is occupying the grounds of Castletown House this bank holiday weekend.

While consulting our festival programme and making our game plan for the day, an elderly man in sharp dress sat opposite us. He gently mentioned that he didn't mean to cause offense by sitting with his back facing us - he was hungry for a bite to eat and wished to study the menus of the nearby food venders.

My mother struck up conversation with the gentleman, remarking on the beautiful scenery. He seemed to know a lot about the property and its different stages of refurbishment. This made us both curious as to who he was, and it was my mother's investigative skills that called it: "You're a Guinness, aren't you?".

Mr. Desmond Guinness bought the Castletown House estate back in 1967. As an author and conservationist of Georgian art, he had bought the property to protect the house and preserve its majestic architecture. However, the costs of such were monumental, as he sadly recalls to us how the building had to remain empty for a few years. Today it is a heritage site maintained by the Office of Public Works.

Desmond's attention seemed to keep straying past our heads and towards the lively crowds of people entering the site. Director Jo Mangan of the Performance Corporation is reputed for animating public spaces, and her Big House Festival has converted the heritage site into the grounds for a fabulous pageant. It seems to make Mr. Guinness smile.

We say our goodbyes and head towards the meadow for Pillowtalk's Catch of the Day. Here we meet a story-telling sailor spinning tales from his canoe in a lake. The actor comes off as sharp and charming in what is a combination of rehearsed performance and improvisation. Director Rosemary McKenna hands you a net to fish out a message in a bottle that when read aloud prompts the actor to tell stories of the sea in tuneful rhyme and verse (from the pen of playwright James Hickson, I'm guessing, who we see scribbling into his notepad under a nearby tree).

It's a small and sweet number, which feels a little strange from a company who usually drive for more provocative material such as Philip Stokes's Heroin(e) for Breakfast and the devised Anna in Between. Like all the performances at the festival, they have to be kiddie-friendly, but this criteria seems to have muted their more dramatic devices.

A new dance performance choreographed by Emma Martin shows that you can stage a dance performance at a family festival while being unafraid to challenge minds. Come Dance With Me is performed by a cast of dancers with intellectual disabilities from Celbridge's St Raphael's centre.

We immediately question what to scrutinse in this work: the skill set of the performers? What Martin is seeking to project about intellectual disability? But over occasionally broken lines of choreography we are drawn into the faces of the performers, who are having a blast - a beautiful presence that is pure and un-rigid. In dazzling ballroom costumes they strut and waltz to sweet arrangements (gathered by competent composer Tom Lane, I suspect). A narrative begins to take shape with scenes humorous but also completely moving. A romantic waltz unveils an intimacy that has remained invisible to us all our lives.

The Big House also saw the relocation of WillFredd's fantastic FARM from its origins as a rural space disrupting the urban world to the environs of an actual farmyard.

As performer Emma O'Kane removes the harness from Ralph the Pony, I overhear a spectator asking a friend: "Is this a part of the play?". The segment has always been presented candidly, respecting the verbatim source of the scene. But when queen bee Marie Ruane and the boys perform their barbershop quartet, FARM dazzles both child and adult alike. And the line-dancing scene being performed at the front steps of Castletown House is a pretty cool sight.

I was wondering if director Sophie Motley would go for a more naturalist staging now that the show was being performed on a farm site but its gaps in its illusions are still here. Perhaps the biggest example of this is the scene with the allotments where the plots are empty despite being described as being full of carrots. But when a child says that he can't see any carrots, his mother tells him: "Use your imagination".

I think this is what this show is ultimately telling us to do. You have to fill in some of the realism for yourself, and that requires some internal questioning. As it is said in Paul Curley's powerful monologue at the end, "the land doesn't lie", and finding our way to our own relationship with the land may require some play in between the literal and the representational, the farm and the theatre stage (neither of which FARM can probably be performed), to somewhere deeply personal.

Posted by Chris McCormack at 5:31 PM No comments: 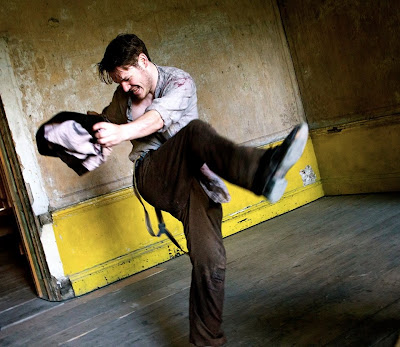 My review of The Dublin Tenement Experience's Living the Lockout exhibition - devised by ANU Productions - coming up just as soon as I try to hide from you underneath my Sunday hat ...

Read more »
Posted by Chris McCormack at 4:41 PM No comments: