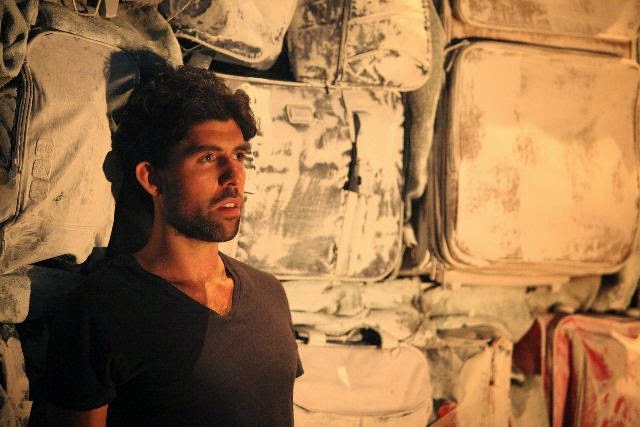 Can Rex Ryan pull off playing a violent, drinking, pregnant woman-beating misogynist who the audience can laugh at?

My review of Pilgrim by Philip Doherty coming up just as soon as I have an octuple whiskey ...

For Rex Ryan, an actor robust and downright charming, the task as solo performer in Philip Doherty's new play is to play a violent, drinking, pregnant woman-beating misogynist who the audience can laugh at. Is the line too jagged to walk?

The play is set during the no-fly zone authorised in the immediate aftermath of the 9/11 attacks. Rex's character Christy, originally on course back to his wronged pregnant girlfriend in Ireland, finds himself amongst the welcoming community of Gambo in Canada. Surrounded by gestures of kindness and co-habitation in a world that has been set ablaze, will he change from party brawler to responsible father?

It is a fussily conceived work, leaving director Aoife Spillane-Hinks to cram circa 20 scene changes into 85 minutes. Excessive use of voiceover suggests that the playwright can't quite leave his liking for dialogue behind, even when the format demands it. Foraging for poetic detail and description instead, the play becomes weighed down by purple prose.

Satire has been an unwieldy device for Doherty, whose Circus of Perseverance tried to present contemporary Dublin as an absurd reality but instead made jokes of the disenfranchised. There is a sense that he is less interested in zealous comedy in Pilgrim, though a fascination with descriptions for women's bodies and people's ethnicities can feel unnecessary. More worthwhile is his portrait of the Irishman begotten from shame with no place in the world, coping only by taking a swig from the bottle.

However, if Christy is to be considered a hero we definitely don't worry for him, despite Ryan's striking commitment to the role. One woman readily forgives him for punching her, another forgives for the mental torment he has caused, and you certainly don't buy any of it. Doherty lets his malty witticisms get the better of him as, in a moment of sexual intimacy, the "throbbing pilgrim reaches the mecca". For the rest of us, the pilgrimage hasn't been as revelatory.

What did everybody else think?
Posted by Chris McCormack at 4:41 AM