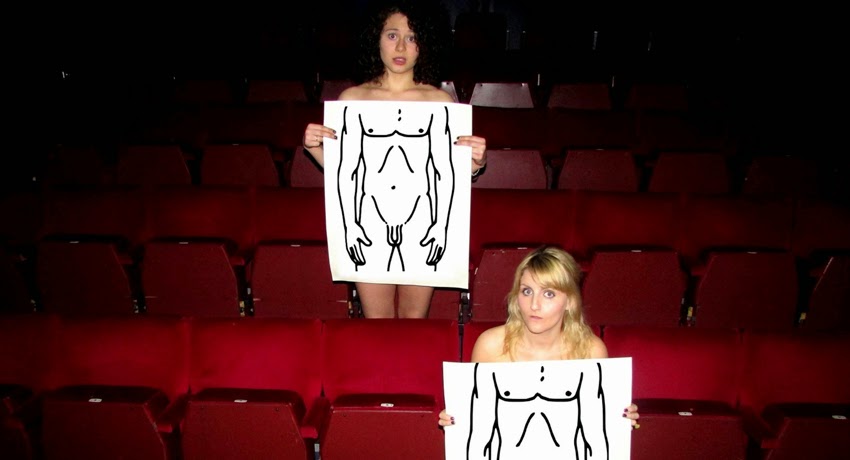 A satire of the industry and its treatment of women takes the form of improvisational theatre. The problem is that its clearly pre-scripted.


My review of B(r)itches by Clare Galvin, Leah Minto and Dylan Coburn Gray coming up just as soon as I can't play the boat ...

"Be men talking about women" instructs the flip-chart standing ominously in B(r)itches - a new satire of the performance industry and its treatment of women. Actors Leah Minto and Clare Galvin rise to the task with spread-legged macho hilarity. Later, while debating whether they'd prefer to act in a commercial for laxatives or STD awareness, you'd wonder if this is really the extent of acting opportunities for female professionals nowadays.

The investigation goes further, to the dilemma dramas of Brecht to the bloody/matrimonial outcomes of Shakespeare. It appears that femininity has been portrayed in poor taste, and worse - women have been cast in roles to portray it. When the task comes for the duo to carry out a sex scene, the absurd process involved feels like a pointed mockery of an unfair industry.

It's a charming affair, with Minto, in self-possession and cleverness, bouncing off the entertaining wit Galvin. What impairs their message is the framing of the event - an improv class where instructions are fed by a flip-chart with an overarching governance that is unexplained. A light script, shaped by urban poet Dylan Coburn Gray, highlights that B(r)itches doesn't belong to the conventions of the improvisational theatre it resembles. As a result, it doesn't fully convince.


What did everybody else think?
Posted by Chris McCormack at 9:35 AM