Dowager, 'Bernarda's House': Women in the Villages in Spain 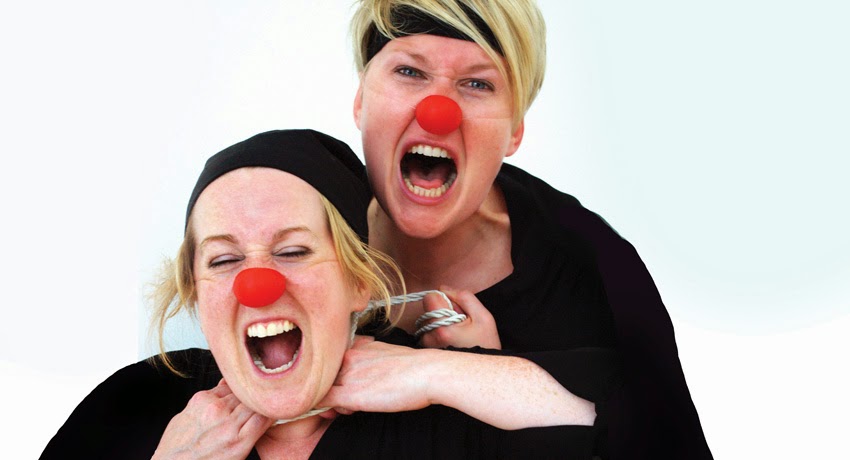 Clown is a remove from reality. Where then does Veronica Coburn's red nose retelling of Lorca's tragedy bring us?

My review of Bernarda's House coming up just as soon as the future and the past photobomb the present ...

Federico García Lorca's last play, premiered in 1945, stands as a wrought representation of corrupted beauty and class prejudice in rural Spain. Why then relocate The House of Bernarda Alba, with its grim portrait of despotism and repressed femininity, to the logic-defying dynamics of red nose?

It's hardly a story to treat lightly: Bernarda, widowed and free from an abusive husband, takes vicious control of her house and imprisons her daughters for an eight year mourning period.

A clown approach might represent a remove from that reality but within Veronica Coburn's oeuvre, red nose has been used to prop open discourses relating to social order and diversity. By allowing Lorca's tragedy to laugh, she also allows it to exhale and unclasp, making room for subtext, specifically a relationship between the child Bernarda and her maidservant Poncia.

In Clare Barrett's joyfully comic and considered turn, a sweet innocence is found in Lorca's Bernarda, presenting a child who would like nothing more than for us to see her house - rolled out as a gorgeous miniature designed by Eimer Murphy. Trading jests with Amy Conroy (who better), passionate and hilariously sexed as Poncia, the double act pries open a space where female sexuality is discussed frankly and honestly.

It inevitably has to submerge the darker side of Lorca's drama. "You have changed, Bernarda" remarks Poncia on the other side of the matriarch's cruel transformation. Conroy's eyes are furious. "Having five daughters will do that to you" delivers Barrett coldly.

It's more of a challenge to sustain the humour but it leads to more interesting places: bodily changes post-pregnancy, jibes and pranks that no longer bounce but pivot and push the two characters against each other until breaking point. Within their expansive range, Barrett and Conroy pull off the comic and the tragic in a drama that ultimately moves.

In the tradition of theatrical mask, it approaches the work with new temperament. If Lorca showed the dark interiors of Bernarda's house, Coburn shows the light that shone beforehand. Snuffing it out brings its own devastated take on womanhood.

Posted by Chris McCormack at 10:54 AM