Druid, 'Brigit': What the Oak Meant 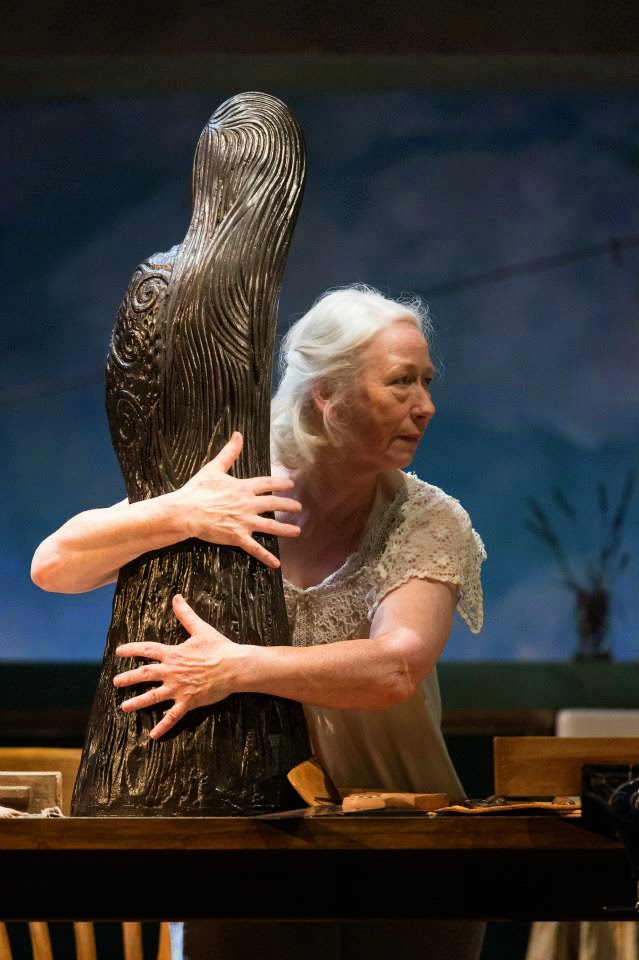 30 years ago Tom Murphy conveyed the mythic timelessness of Irish storytelling in Bailegangaire. The new prequel Brigit sees the playwright tracing our traditions back further than before.

My review of Brigit by Tom Murphy coming up just as soon as I hang my cloak on a sunbeam ...

"What did she look like"? puzzles the sculptor in Tom Murphy's new play, played with chiseled resolve by Bosco Hogan. Like the preoccupied artist, the playwright is scrupulous in his search for truth, his plays often formed by folk findings and listening to stories. The results can be grave: Murphy has extensively portrayed the Irish people as a tribe with no home, their devastation still resonant from Druid Theatre Company's last cycle of his plays (encompassing Famine, A Whistle in the Dark, and Conversations On a Homecoming). It's special of him then to try to claim, not necessarily a place, but, a time that is unmistakably ours, when we drew wisdom from the fire and, compelled, traded stories of despots and goddesses.

Set 30 years before the landmark play Bailegangaire, Séamus O'Toole (Hogan) is a labourer who has been shortchanged by the church. In the standoff, he has forbidden his three grandchildren from going to mass, though his wife Mommo (Marie Mullen) leads them in reciting their prayers at home. When a young nun in the convent accidentally shatters the statue of St. Brigid, an unaffected priest (Marty Rea) offers a commission for Séamus to create a replacement. The terms of payment properly negotiated, he accepts the task, though his obsession for a truthful resemblance sends him further than the Christian saint and back to the Gaelic goddess Brigit of the older religion.

Less entwined than it's sequel, Brigit is a neat episodic play by a writer that's more interested in telling a story than the composition of such. A script that skilfully blends ordinary speech with the lyricism of the seanachaí is realised in the detailed strokes of Garry Hynes direction, and the result is the playwright's most watchable play yet. Francis O'Connor's set design is vibrant like a watercolour painting, propping church and cottage side by side, and carefully detailed to mark the erosive passing of time between this performance and the accompanying revival of Bailegangaire.

Murphy's dislike for the church is no secret, and this representation of its opposition to the artist certainly feels personal. Through the incantatory character of Mommo he effectively un-codes the Christian translation of the Gaelic goddess. "I cannot tell you what she looked like" she says to her husband, "but I can tell you a lot more it if aids you". In the glow of the fire, Marie Mullen's voice winds like an old Connemara road, dusting off an ancient figure who in her myriad duties seemed to safeguard us all.

In different respects, it's a play that makes you feel privileged. Those familiar with Bailegangaire will be affected by this warm and brighter chapter in the lives of Mommo and her "Stranger" Séamus. Realisations of a grandson intimidated by the gander, granddaughters with ribbons in their hair, and a hearth that is susceptible to spitting sparks will have a sad affect for those aware of the events ahead. Experienced on its own, it still feels sacred. In the presentation of a beautiful oak statue, long-faced and arced like an idol of old, Brigit leads us all back to our beginnings.

What did everybody else think?
Posted by Chris McCormack at 5:37 AM