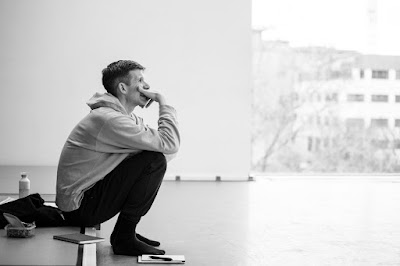 Rehearsal image for The Casement Project by Fearghus Ó Conchúir, pegged to be a main event in the 1916 commemorations. Photo: Ste Murray.

Read more »
Posted by Chris McCormack at 2:53 PM No comments: 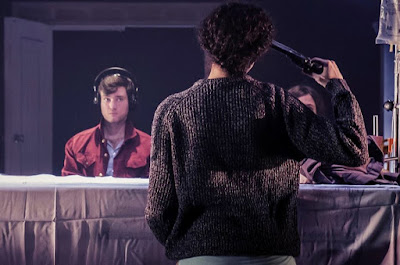 Still a lot of fun to be had at the cutting edge, as evidenced by Dead Centre's Chekhov's First Play. Photo: Jose Miguel Jiminez

Yesterday I posted my top 10 of 2015. Here are other highlights from the year:

Read more »
Posted by Chris McCormack at 3:00 PM No comments: 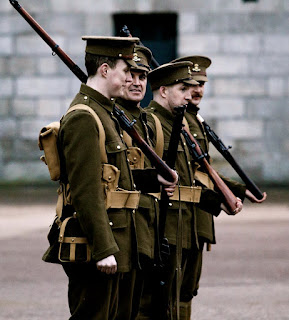 Thinking back on 2015, I’m reminded of the mobilisation of artists around the Marriage Equality Referendum and the #WakingTheFeminists outcry over the Abbey Theatre’s male-mad 2016 season. I’m reminded of gutsy programming by Galway International Arts Festival to host Exhibit B, a controversial installation that internationally spurred the modern equivalent of a theatre riot, and by Tiger Dublin Fringe to take a chance on Kim Noble, a guerrilla-performance artist on a risky search for companionship.

In trying to narrow down my theatre-going (I wrote about 120 performances this year) to a list of ten, I’ve kept to the parameters of new productions by Irish/Northern Irish companies, or co-productions where the creative half is Irish. This leaves out Andrew Scott’s seamless performance in the Paines Plough production of Sea Wall, co-produced by Dublin Theatre Festival, though it was probably my favourite performance this year. I’ve also left out the Gate Theatre’s production of The Gigli Concert because Denis Conway had performed the part before, and I figured I could make room for something else, though that doesn’t excuse the omission of Sinéad McKenna, who gave the best lighting design this year.

Whenever I’ve written an end-of-year list, I’ve tried to keep to the idea of ‘best’ as moments in the theatre when I felt a significant shift in my thinking, when I’ve registered a change in my biology: the welling of emotion, the howl of laughter or a menacing discomfort.

(Finally, thank you to readers who followed me this year from Musings In Intermissions to A Younger Theatre and Broadway World, and most recently Exeunt Magazine and The Stage. Keep an eye out for me in the two latter publications in 2016).

Read more »
Posted by Chris McCormack at 4:21 AM 4 comments:

Where you can find my reviews ... 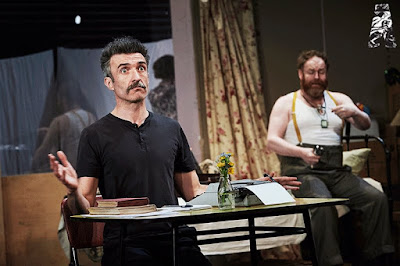 Writer Donal Davoren (Mark O'Halloran) clearly swamped in The Shadow of a Gunman.

It's about time I posted something on the blog, even if it is just an update.

I think 2015 has seen some promising steps on my path towards sustainable Critic-hood. I began writing for two online publications, Broadway World and A Younger Theatre, and while neither come anywhere close to paying my rent (yet), I have enjoyed the magic in seeing my name appear in (digital) print.

When Irish Theatre Magazine ceased its regular publishing last year, I was writing solely here on Musings In Intermissions. While I recognised the importance of upping my game (especially outside of Dublin, where critical outlets aren't as common), I also realised the limits that come with a blog.

Academics wanted to reference me in articles but ultimately couldn't because a blog is subject to editorial concerns. Theatre promoters wouldn't take my quotes and hang them in fairy lights because Musings In Intermissions wasn't the Irish Independent. When I applied for jobs, I felt silly for jotting down "blogspot.ie" in applications, and cursed myself for not choosing a shorter, catchier title when I impulsively set up MusingsInAreYouStillListening? while mulling over The Rehearsal, Playing the Dane five years ago.

However, I couldn't have made any progress without this blog, and I encourage all rising critics to have one. I haven't decided what to do with this platform yet. I'll likely use it to ponder more personal thoughts as I have done here, and roll it out when it comes to posting shorter, more time-sensitive pieces, as during Dublin Fringe.

Meanwhile, you can stay appraised of my BroadwayWorld pieces here and A Younger Theatre here.

Posted by Chris McCormack at 4:16 AM No comments: 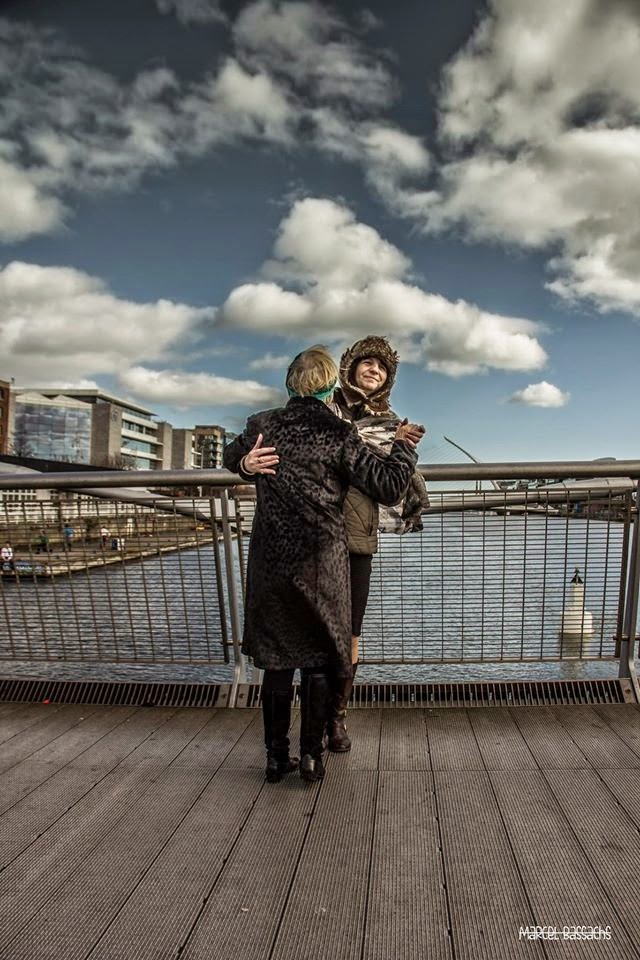 Poised for another phase of redevelopment, Dublin’s Docklands becomes a mise en scène in an initiative bringing together choreographers and urban planners (Photo: Marcel Bassachs).

What activates a space? For Italian translator and dance curator Giulia Galvana, it’s a single step. Her initiative Mind Your Step, a two-day event involving a performance trail and a symposium bringing together choreographers and urban planners, is based upon a singular principal: movement creates centres of activity. Now brought to Dublin in collaboration with dance managers Eleanor Creighton and Argyris Aryrou, its arrival is timely. With the Docklands poised for another phase of redevelopment, this provides an opportunity to explore how public spaces are explored and presented.

Read more »
Posted by Chris McCormack at 11:11 AM No comments:

That 'Marry' Is the Very Theme 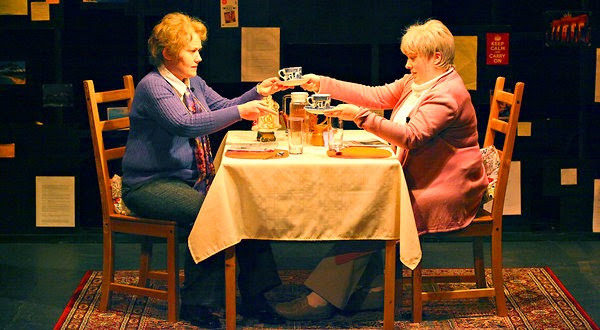 Production image of I ♥ Alice ♥ I by Amy Conroy (photo: Ruby Washington). As the nation approaches a referendum on same-sex marriage, what has Irish theatre told us about marriage and gay lives?


Who would have thought that Dion Boucicault, the 19th century Irish melo-dramatist who nowadays fills seats for the popular and commercial theatre, is presently one of the most politically provocative playwrights in the United States? Or at least sharing the mantle with the rising Branden Jacobs-Jenkins, who has adapted Boucicault’s The Octoroon for New York’s Soho Rep.

Read more »
Posted by Chris McCormack at 10:49 AM No comments: 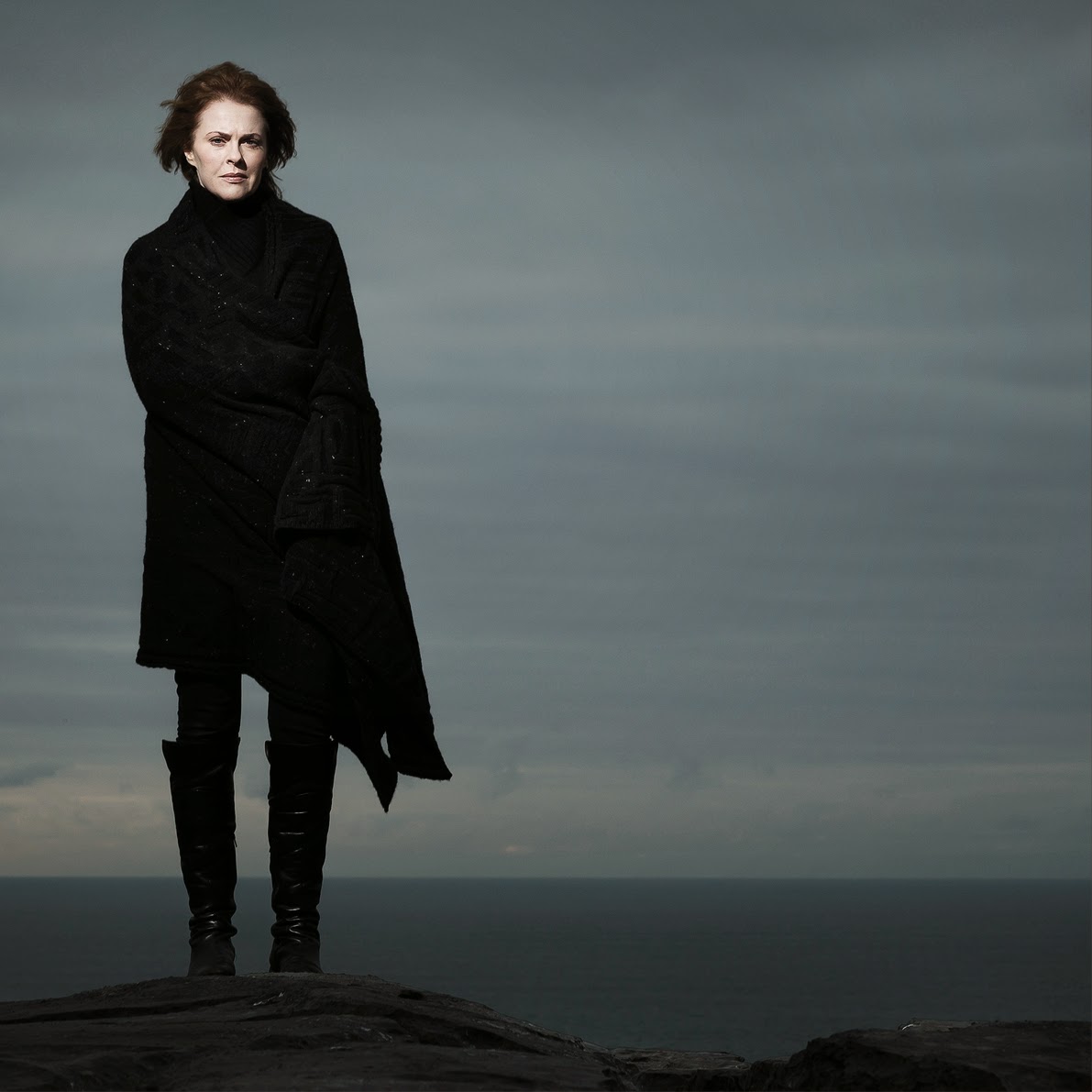 Two out of three kings have been cast as women: one of several innovative decisions made in Druid's presentation of Shakespeare's Henriad Cycle.

Details of DruidShakespeare have been announced. Click on to my feature at A Younger Theatre to find out more ... 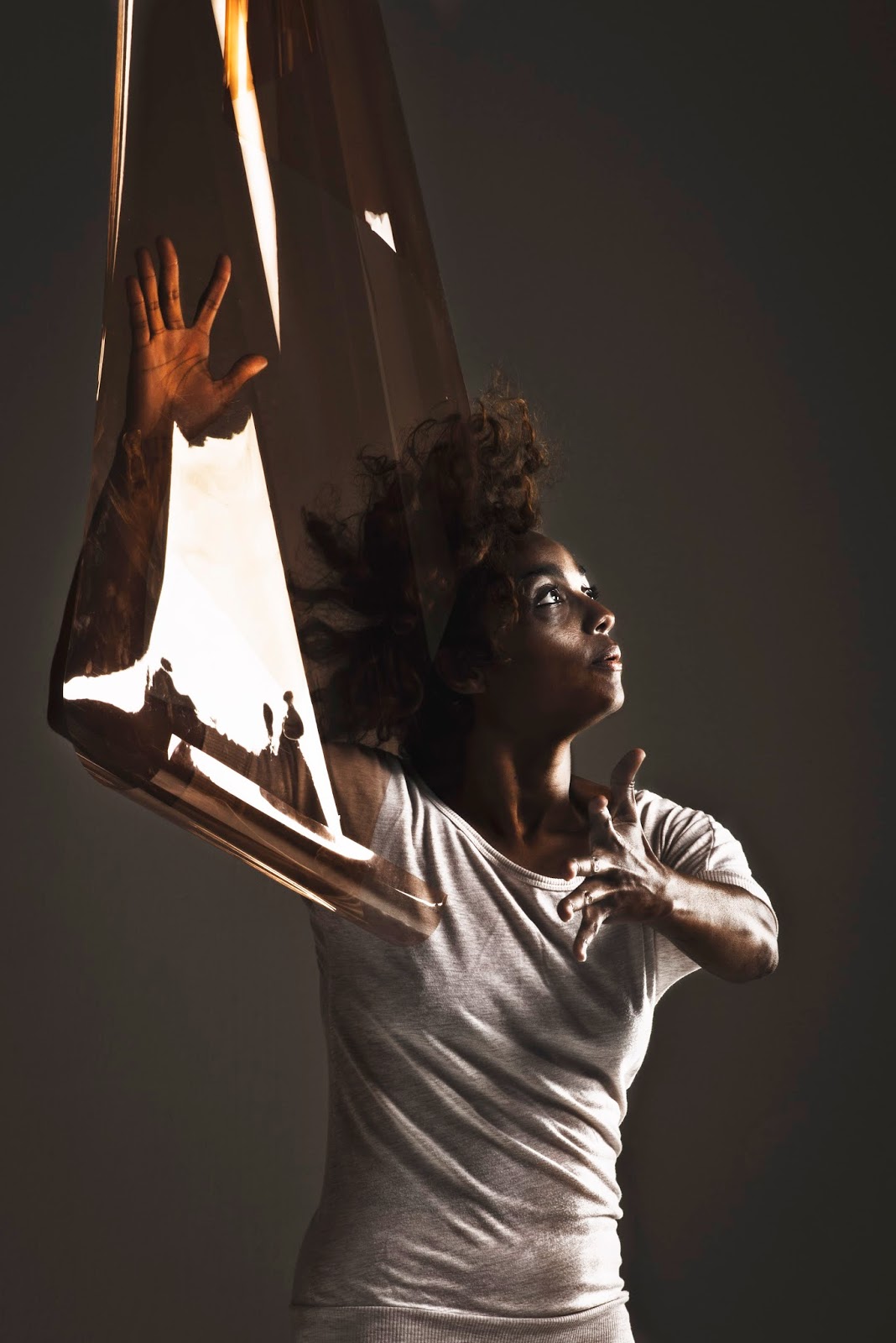 Liz Roche's Sailing to Byzantium-inspired Bastard Amber marks the first commission of an Irish choreographer for the Abbey stage.


Dublin Dance Festival has an extra skip in its step. Last year's festival saw an increase in audience attendance by 57%, due in large part to festival director Julia Carruthers’s commitment to outdoor and free events. In what is possibly her final year in the role (a call for applicants went out in January), she has managed to secure the Abbey Theatre for the duration of the event, as well as the historic first commission of an Irish choreographer for the theatre’s main stage.

Read more »
Posted by Chris McCormack at 11:33 AM No comments: 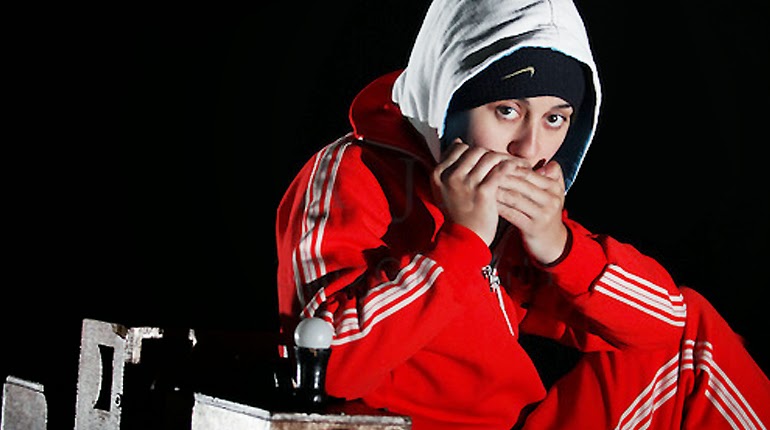 A mother and son shock a nation in Witness. But provocateur/playwright Carmel Winters risks being the scandal of this story.

My review of Witness by Carmel Winters coming up after the jump ...

Read more »
Posted by Chris McCormack at 7:23 AM No comments: 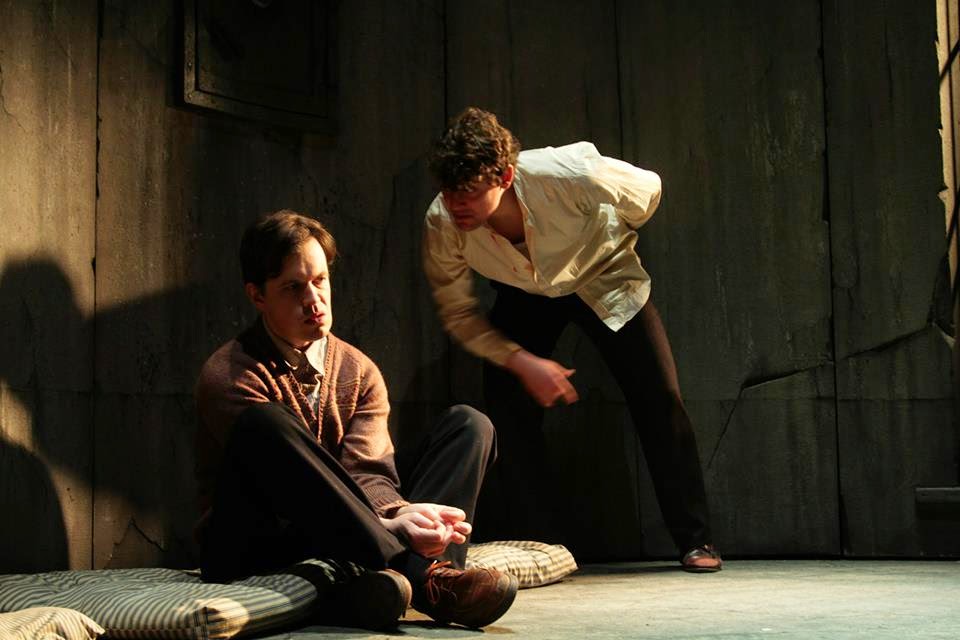 Decadent Theatre give the first homegrown production of Martin McDonagh's The Pillowman.

I saw The Pillowman at the Town Hall Theatre in Galway last week, and reviewed it for A Younger Theatre. Now it's your turn. What did you think of Andrew Flynn's staging? Did David McSavage do it for you as Detective Tupolski? What did you think of Peter Campion, Gary Lydon and Michael Ford-Fitzgerald? Did you like Owen MacCartaigh's set? Have you seen Decadent's other productions of Martin McDonagh, and if so how does this measure up?

Sound off in the comments below.

Posted by Chris McCormack at 5:14 AM No comments: 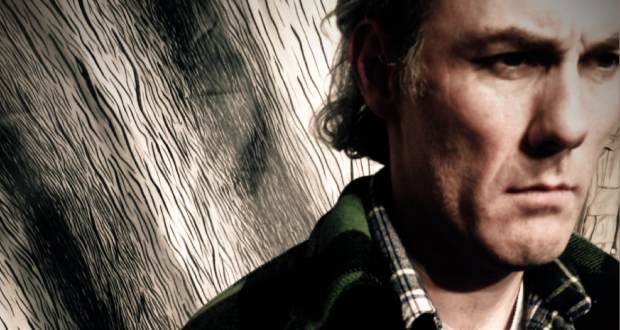 My review of The Hole by John Sheehy coming up after the jump ...

Read more »
Posted by Chris McCormack at 5:36 AM No comments:

The Ark, 'Far Away From Me': The Prince and the Pea 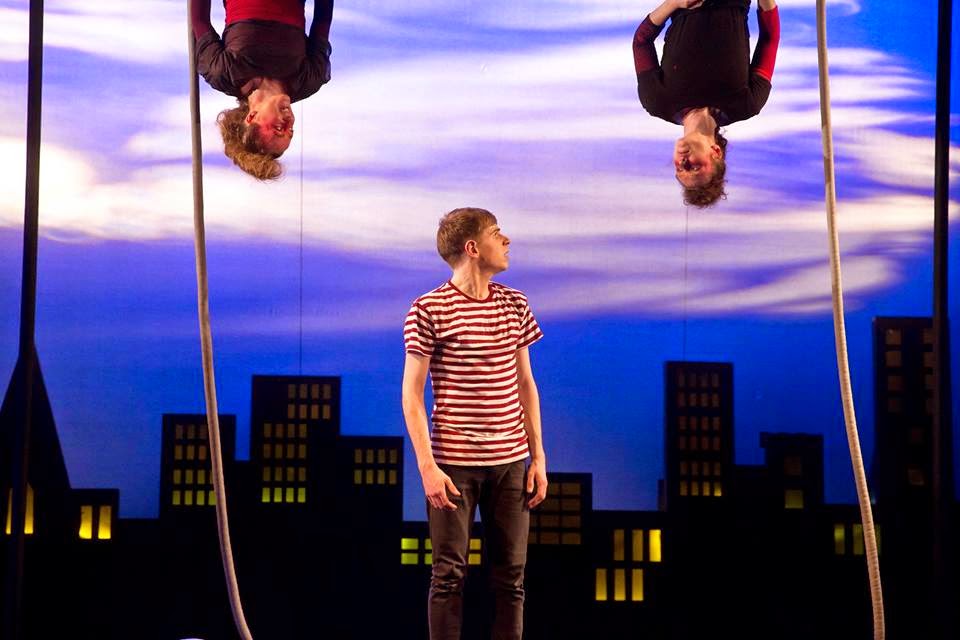 My review of Far Away From Me by Amy Conroy coming up after the jump ...

Abbey Theatre, 'A Midsummer Night's Dream': A Most Rare Vision 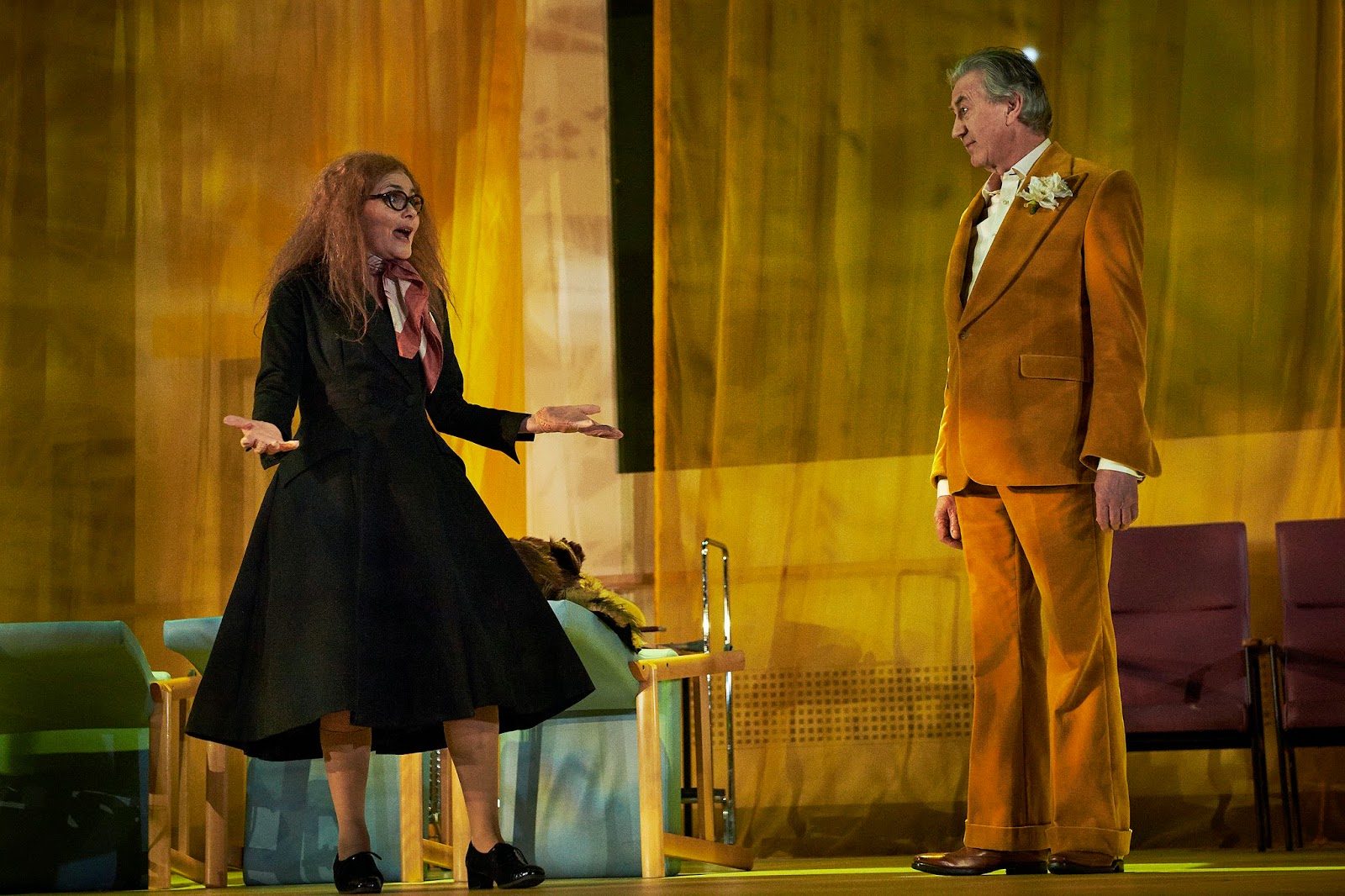 My review of A Midsummer Night's Dream is over at A Younger Theatre. Now it's your turn. What did you think of director Gavin Quinn's interpretation? Do you prefer a faithful performance of the text or a deconstruction à la Pan Pan? What performances stood out for you? Your thoughts on Aedín Cosgrove's design and, furthermore, Bruno Schwengl's strange and eccentric costumes? Would you like to see Quinn work at the Abbey again? Should the theatre keep producing Shakespeare?

Sound off in comments below.

Posted by Chris McCormack at 8:44 AM No comments: 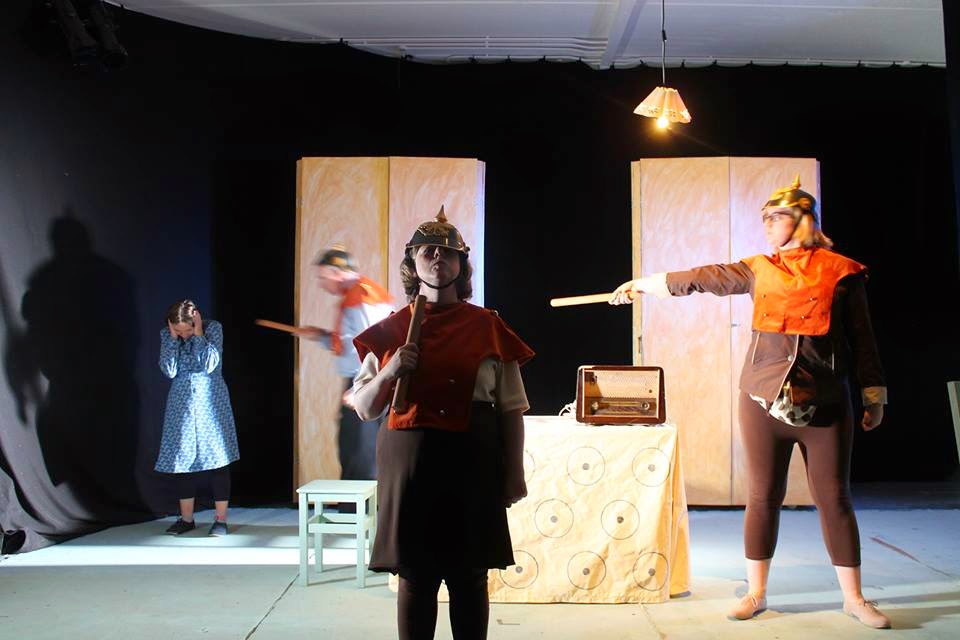 This ensemble of artists with and without learning disabilities are empowered in a glowing production.

My review of Memory Box coming up after the jump ...

Read more »
Posted by Chris McCormack at 4:33 AM No comments:

Lyric Theatre, 'Death of a Comedian': Deal With the Devil 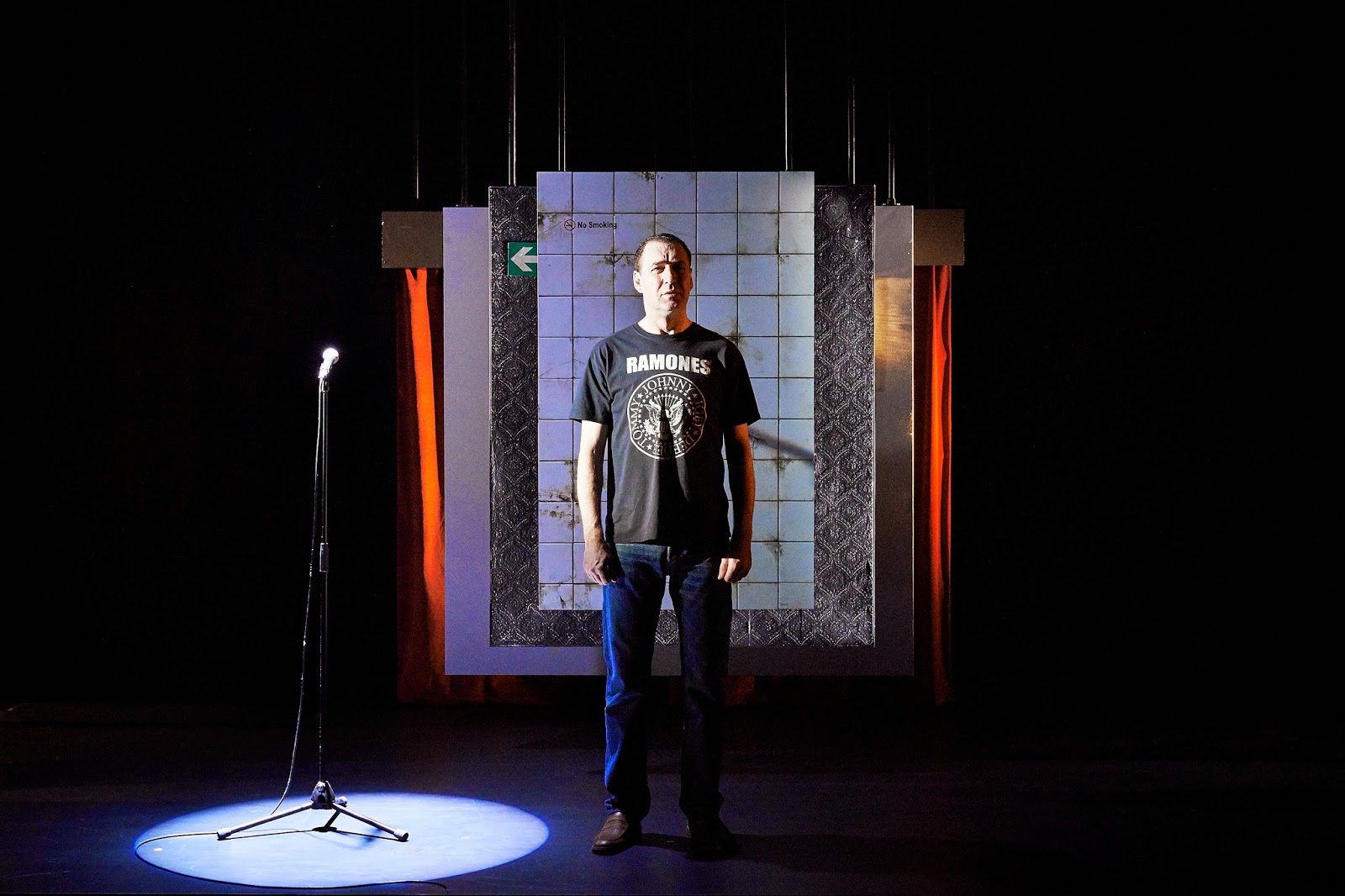 My review of Death of a Comedian coming up after the jump ...


Read more »
Posted by Chris McCormack at 5:03 AM No comments: 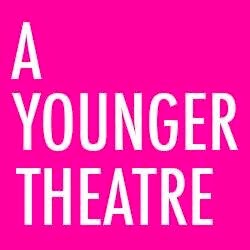 You'll have to go somewhere else to read my Pals and A Midsummer Night's Dream reviews.


Last September, I sat at conference table inside a glass building in London's King's Place. Sitting across from me was a blonde-haired woman, listening carefully and speaking excitably, as if hope was to be found at the turn of every sentence. Hope was the reason I was there. That woman was Lyn Gardner, theatre critic of The Guardian, and a personal hero.

Rough Magic, 'Everything Between Us': Ignorance is Bliss? 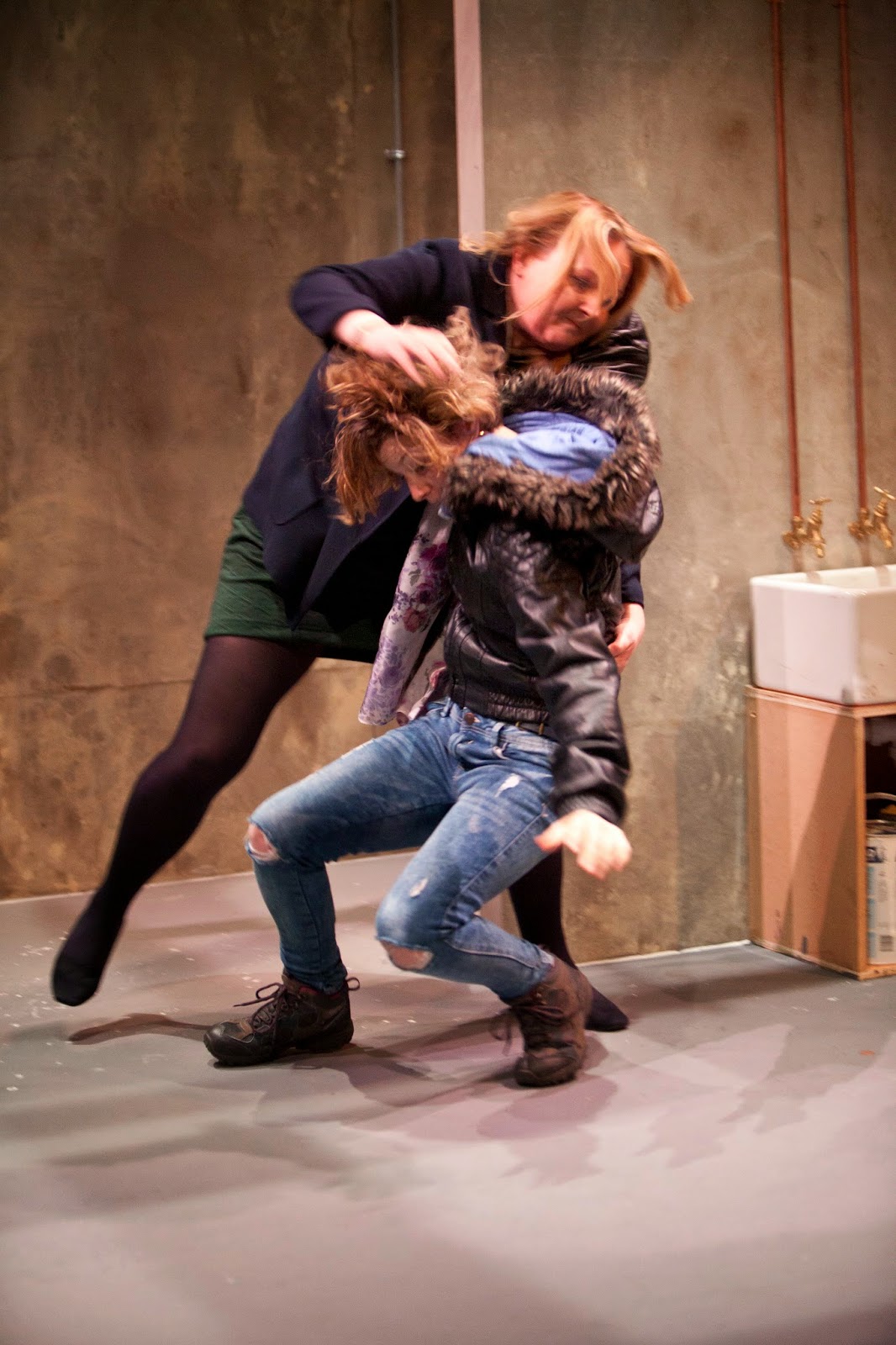 Two sisters collide in the foreground of Northern Ireland's Truth and Reconciliation Commission. But obliteration isn't the goal.


My review of Everything Between Us by David Ireland coming up just as soon as I become manager of a Starbucks in Ballymena ...


Read more »
Posted by Chris McCormack at 6:13 AM No comments:

THEATREclub, 'HEROIN': Through the Eye of the Needle 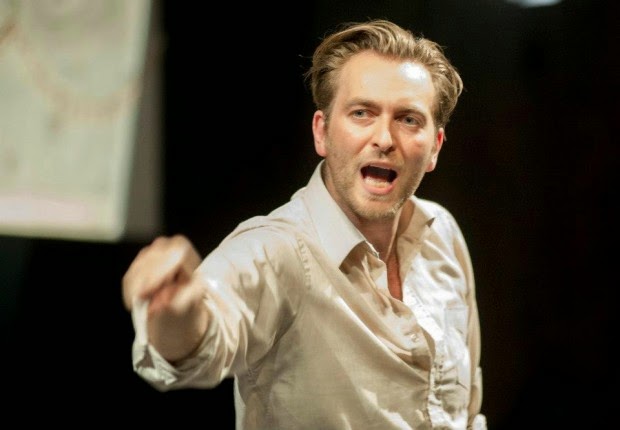 My review of HEROIN coming up just as soon as Lemass helps us play catch-up ...

Read more »
Posted by Chris McCormack at 8:42 AM No comments:

Cadence Theatre, 'One Is Not Oneself': Why Must The Show Go On? 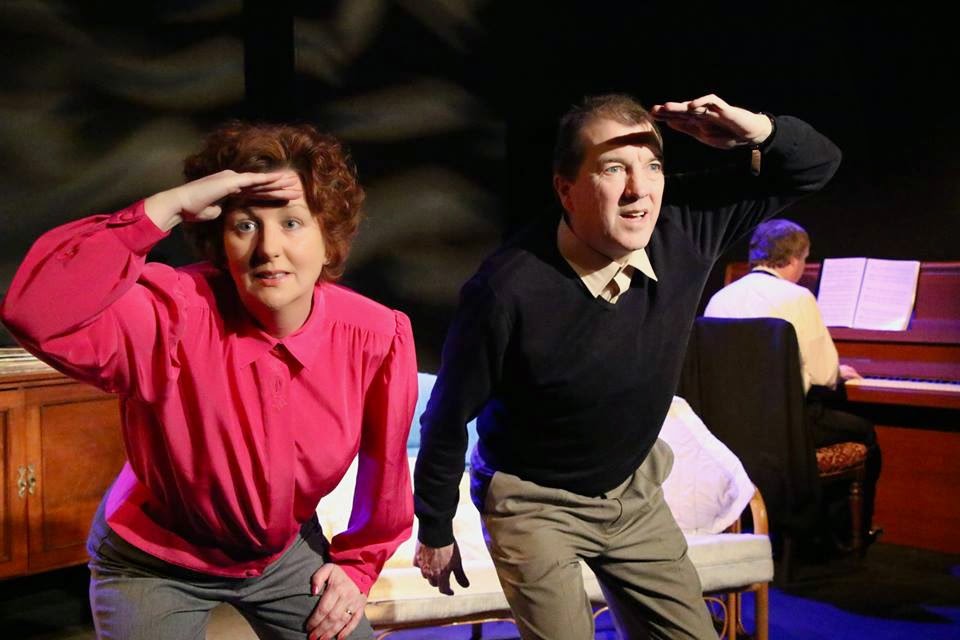 A couple grieve their son’s death in this Noël Coward-inspired drama.

My review of One Is Not Oneself by Gerard Lee coming up just as soon as the orchestra has an extraordinarily small repertoire ...

Landmark Productions, 'The Walworth Farce': What Are We, If Not Our Stories? 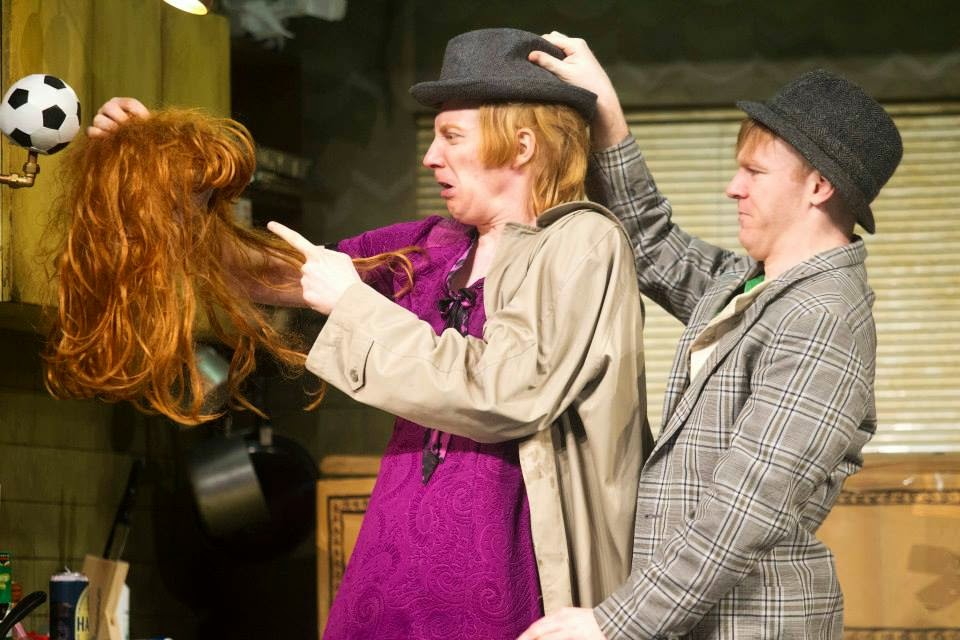 A father and his sons perform a ramshackle play about their departure from Ireland in Enda Walsh's grotesque drama. Photo: Patrick Redmond


My review of The Walworth Farce by Enda Walsh coming up just as soon as I bring you to the beach in Brighton ... 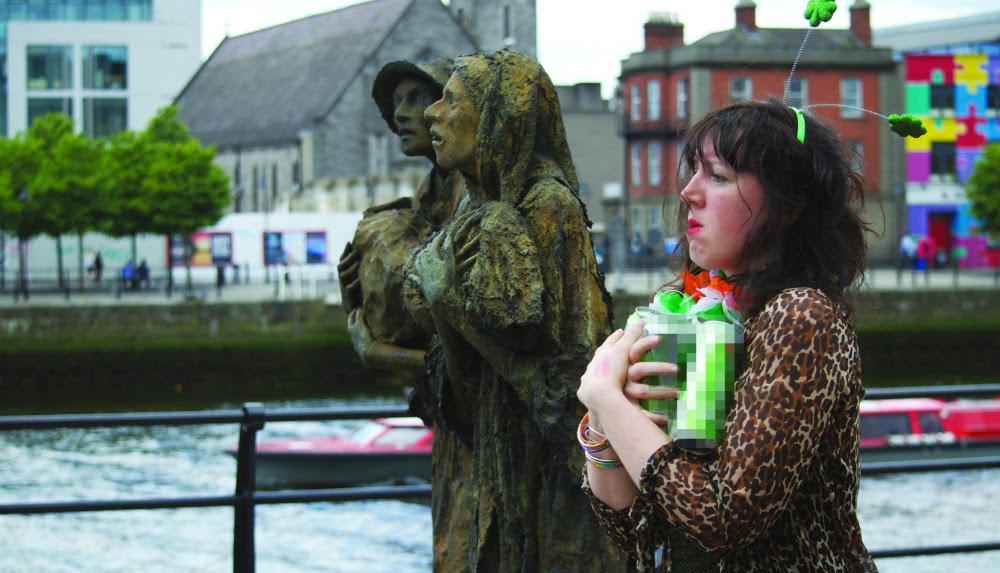 Eleanor Tiernan's National Therapy Project sets out to heal the Irish psyche by satirising past miseries.

It speaks volumes that First Fortnight, an arts festival that runs the first two weeks of each year with the aim of challenging prejudice to psychological well-being, brings its audiences through the doors of St. Patrick's Hospital, the country's largest mental health provider. Passing staff, doctors and visitors bring the otherwise un-reminded reality of illness and recovery into view. It proves the length of which festival director J.P. Swaine and his team are willing to face stigma head on.

Read more »
Posted by Chris McCormack at 6:55 PM No comments: 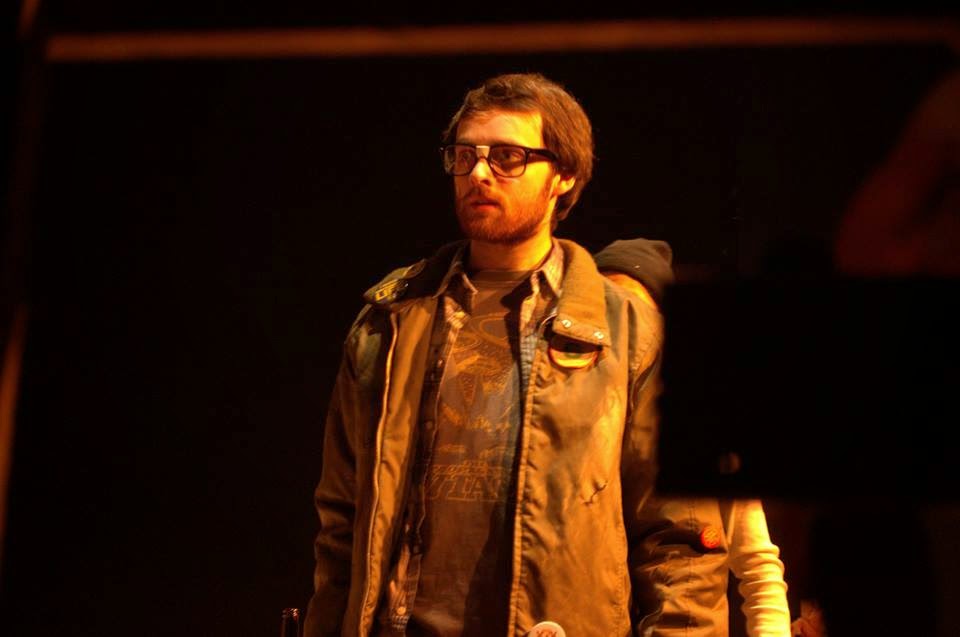 My review of Fireplay by James Ireland coming up just as soon as I play a game of Beggar-My-Neighbour ...

Read more »
Posted by Chris McCormack at 4:12 PM No comments:

ANU Productions present PALS, an installation based on events surrounding the Irish who fought at Gallipoli in WWI.


Some plays for your diary ...


Read more »
Posted by Chris McCormack at 6:50 PM No comments: 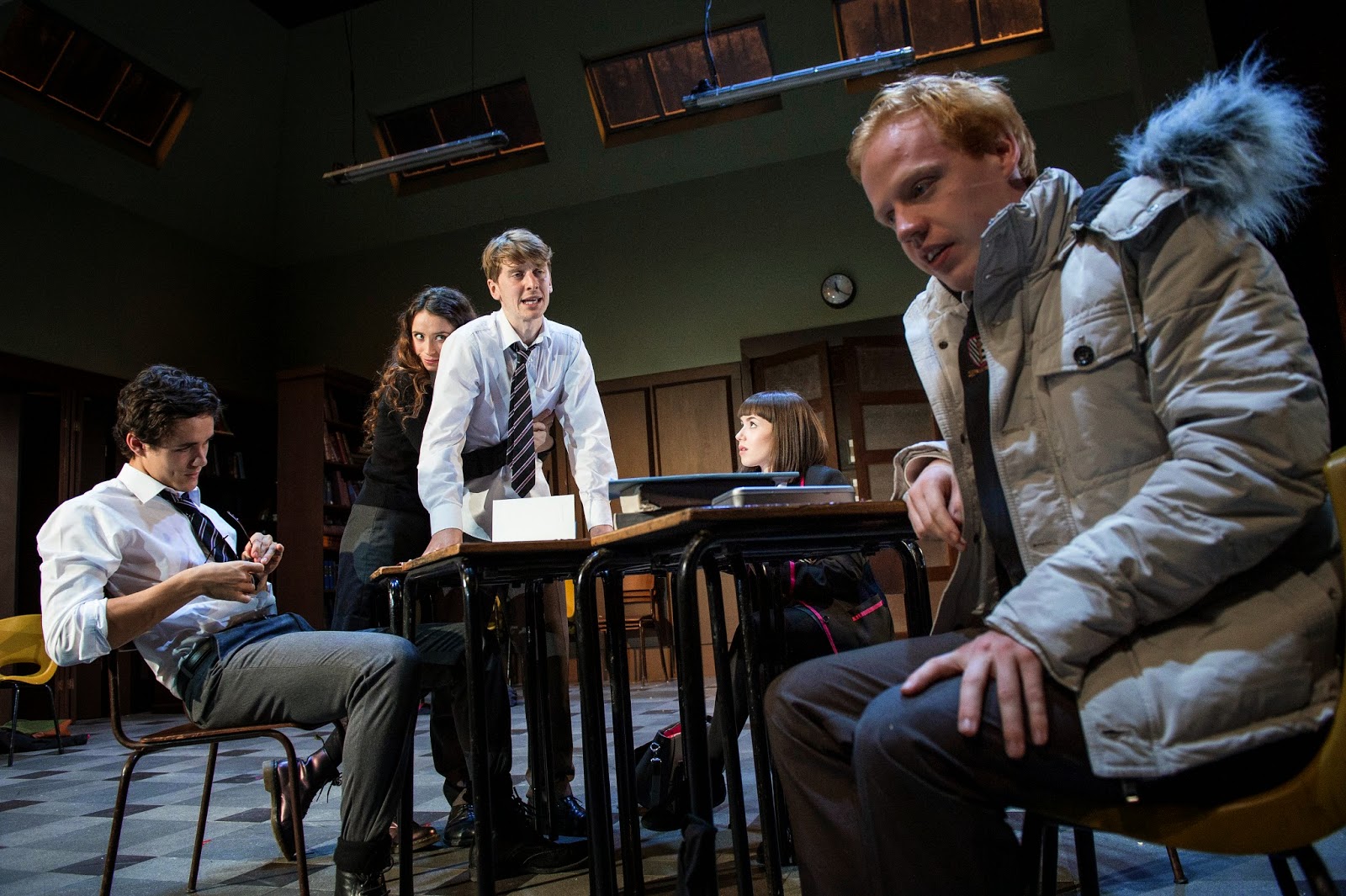 School was out this summer and some of the first graduates of The Lir lent serious verve to Selina Cartmell's kinetic staging of Punk Rock.

I already made a list of my top 10 Irish theatre productions of 2014 but here are more highlights that deserve mention ...

Read more »
Posted by Chris McCormack at 7:50 PM No comments: