Collapsing Horse has disbanded, THEATREclub's future is uncertain. Both embodied youthful resistance to the Recession 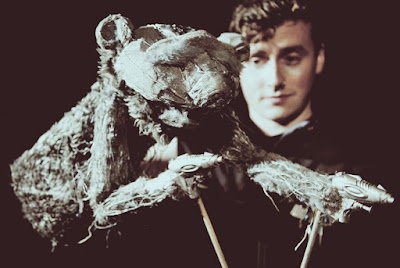 There is a souvenir I keep from the early years of the 2010s, that bleak era of austerity. It’s a programme for the 2011 Dublin Fringe Festival. Where previous festival designs were bright in colour, with photos of uplifted crowds, this programme was dominated by a black and white typeface, spelling out artistic manifestoes on placards. Protest signs were common that September, as the Occupy movement set up its tents, and the Fringe seemed to be staking a claim.

Flick through the programme, and you’ll find Twenty Ten, the six-episode play by THEATREclub. Every day during 2010, THEATREclub invited people to respond to a question via email: “What have you learned today?” Over 4,000 replies were edited into an absurdist script, crafting a collective voice during a year blighted by government cuts. Durational and sprawling in effect, you might have sensed Forced Entertainment’s shocking electricity.

That period will be forever associated with artists who smashed through the pretences of dramatic theatre. Their preference was for self-reflexivity and jagged edges, not sealed-off fictions and varnished surfaces. It was a generation that came of age just as their country spun downwards, the twenty-somethings for whom career paths crumbled and peers emigrated. They had been kicked to the ground by the financial crash, so making art out of the rubble made sense for THEATREclub, The Company, Side-Show Productions, Waterdonkey, Talking Shop Ensemble, and others.

When we’re asked to look back on what theatre looked like during the Recession, THEATREclub’s Ireland Trilogy will be a key artefact. Rough-edged and impassioned, it follows the struggles of weary heroin addicts, desperate family members, the neglected residents of a council housing estate, all living inside broken-looking flats and houses. (Director Grace Dyas once recalled designer Doireann Coady “climbing through barbed wire” to acquire pieces of the apartment set for Heroin).

The trilogy wrote buried traumas back into the country’s history, its unravelling through addiction, its failed housing regenerations. Distrustful and angry, it captured the mood of a nation.

Recent disquiet within THEATREclub grew into an audible buzz last month, when Peter Crawley wrote in the Irish Times that Dyas had departed the company. Look online, and you’ll find their website is down. Their social media hasn’t been updated in months. When Coady presented a work-in-progress at the Dublin Theatre Festival, she did so under her own name. THEATREclub’s future now seems uncertain.

That’s sad to contemplate after so many companies from that generation seem to have ceased, from WillFredd Theatre to The Company, With an F Productions, Mephisto, Spilt Gin, Fitzgerald and Stapleton, Clinic Media, Side-Show Productions, Waterdonkey, Come As Soon As You Hear, Bluepatch Productions, Sheer Tantrum, ThereIsBear!, JustTheLads, Ramblinman,  and so on.

With the flooring news that Collapsing Horse has also disbanded, one era of young artists making theatre in a capsized country seems to have come to an end.

Collapsing Horse were as much an embodiment of youthful resistance as THEATREclub. Their debut, the fantastic comedy Monster/Clock, had an aesthetic that was energetic and exposed. Music was played and sung live, stage machinery jutted out into imaginatively spectacular shapes, as if the transformation of raw materials during hard times was a miracle in itself.

In Monster/Clock, a watchmaker goes on a quest to rescue his kidnapped mentor. He journeys to a city where the inhabitants are enslaved, their futures literally stolen by a god-like monster. The play’s point-of-view undoubtedly belonged to young people of the time.

Where THEATREclub took austerity as inspiration to agitate, Collapsing Horse went on a different route. They made comedies that were embedded within a specific cultural lineage, an inheritance of childhood television lit up by outlandish humour and anthropomorphic puppets, the extra-terrestrial and animal characters of The Den. The future had disappeared behind a fog, and Collapsing Horse recombined old references to forge new adventures, with new mavericks.

That led playwright Eoghan Quinn to write some terrific surreal comedies for the company. The best was Bears in Space, an adventure play about two ursine astronauts searching for a cure to a mystery illness, encountering nutty characters along the way.

It gave Jack Gleeson an excellent over-the-top performance as a weird alien whose only friend is his own voice recorded on tape. Cameron Macauley played a narrator obsessed with Jane Austen, eternally making unlikely references to Georgian literature. Bears in Space bounced like a pinball between wonderful non-sequiturs and bizarre juxtapositions, repelling any philosophising along the way. Such was the magnificent mechanism at its heart.

It’s true that independent companies disband, and individuals continue on as freelancers. Some fans may have applauded director Wayne Jordan, for instance, after he closed down his company Randolf SD but still brought his pleasing use of colour and strutting diva characters to stagings for the Gate and the Abbey.

On the other hand, others may miss the kind of leftfield and neglected plays that were Randolf SD’s speciality. There is a unique chain reaction that only happens when key people are gathered together. It is what's meant by "company".

When that ends, the art isn’t quite the same.

Posted by Chris McCormack at 2:59 PM