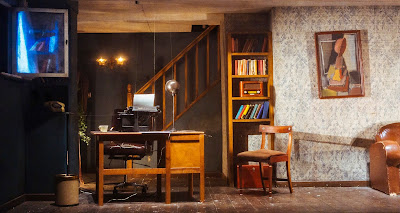 This miraculous play without performers takes us to Nazi-occupied Paris, and the source of Samuel Beckett's storytelling. Photo: Kyle Tunney

Suzanne Dechevaux-Dumesnil, a vigilant member of the French Resistance, arrives at her Paris apartment with alarm. She warns her boyfriend Samuel Beckett that the Gestapo weren’t convinced by her cover story, and that their home might come under attack, in Dead Centre and the Gate Theatre’s extraordinary new play Beckett’s Room.

Beckett has yet to become the breakout playwright of Waiting for Godot, but that play's famous no-show inspires how this story is told. Dead Centre’s wonderfully imaginative script, written with Mark O’Halloran, is a play without performers. Suzanne and Samuel come and go in ghostly movements, their presence animated by elaborate puppetry and painstaking lighting. Her coffee cup floats by the kitchen sink, calming her nerves, while his chair swivels playfully behind his desk. Such is the achievement of Bush Moukarzel and Ben Kidd’s miraculous production that both characters are present in their absence.

Through headphones we hear Barbara Probst’s Suzanne, fearful that she will be exposed by the Nazis. Samuel, in the reassuring voice of Brian Gleeson, suggests that they carry on life as normal. They chop vegetables, they kiss. They climb into bed, the sheet levitating magically into the air, ushering them under the covers. For a play without performers, it’s heartwarmingly intimate.

That makes their refuge all the more fragile as the apartment comes under siege. When their landlady Madame Karl (Viviane De Muynck), a Nazi sympathiser, arrives to inspect the home for Resistance secrets, she reflects on her time working in a puppet theatre. “Never looking for meaning, only magic,” she says, describing its artistic vision. For a moment it seems that Beckett’s Room follows the same instruction, delighting with its parlour tricks, until interrupted by Madame Karl's own warped illusion.

More sinister is an invasion by two Gestapo soldiers, who vandalise the apartment and use it to torture a prisoner. One solider, a new recruit clueless about his mission, is quizzed about his knowledge of Mein Kampf, before his senior officer sets a copy on fire. War seems like a theatre of the absurd.

Stained with the memory of blood, the apartment mightn't be able to be a home. But there, sitting in the dark without electricity, friends are reunited and tell stories of gathering somewhere else: the theatre. As Suzanne’s experiences of the war are built into an unsettling metaphor - a Paris of disappearing bodies, powerfully depicted by José Miguel Jiménez’s video projection - it seems like they could be the source of Samuel Beckett’s storytelling.

That’s an intriguing idea, but the play’s strength lies in its touching tale of survival. At one point, Samuel turns to Suzanne as if it were a fresh realisation. “Now I see you,” he says. No one else can see them, in their own private void, away from a world at war.

Posted by Chris McCormack at 5:30 PM