Blue Raincoat, 'The Playboy of the Western World': Going to the Dogs 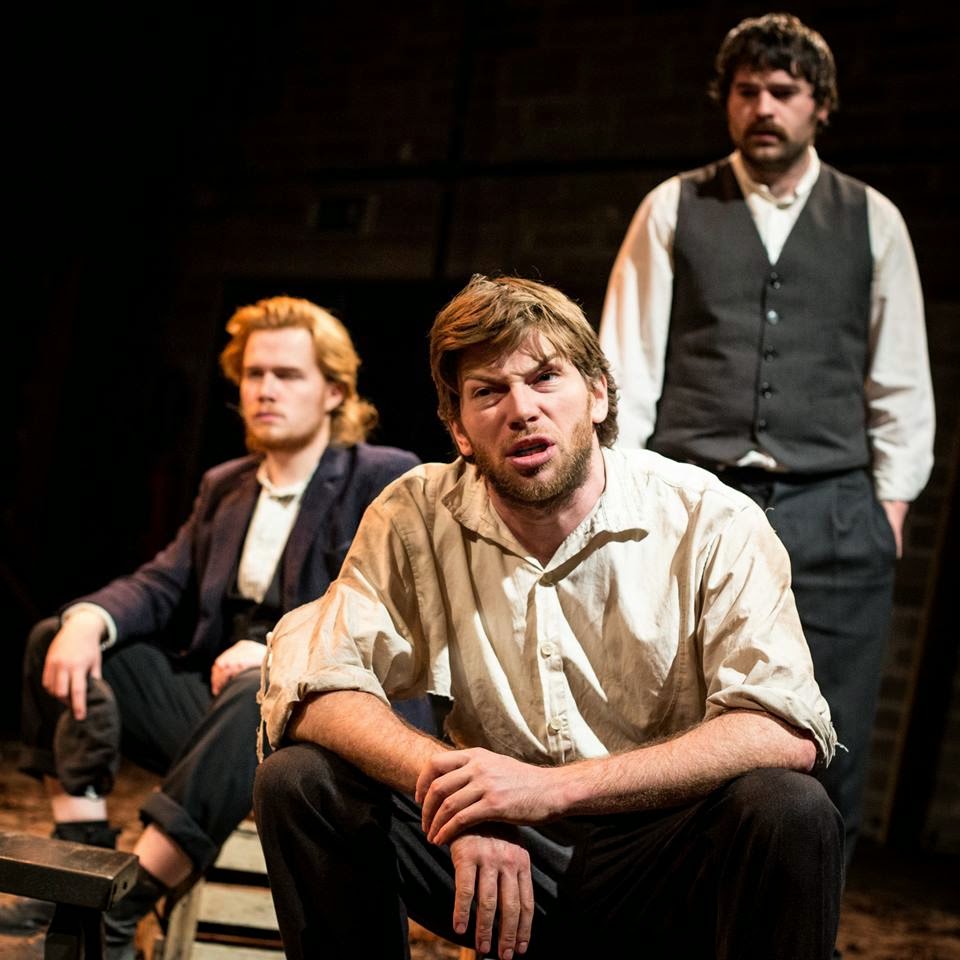 The stifling realism of Synge's play prompted riots at its 1907 premiere. What happens when Blue Raincoat take The Playboy of the Western World out of the peasant cottage?

My review of The Playboy of the Western World by John Millington Synge coming up just as soon as I set the guardian angels winking in the clouds above ...

Christy Mahon wishes he had killed his father sooner. The liberated playboy bounces across the stage with Blue Raincoat's trademark physicality, as actor Bob Kelly sculpts imitations of village girls and their extravagant praises. Christy is championed by the locals for his horse-racing, enamoured by the publican's daughter Pegeen (Sandra O'Malley, truly possessing "the fright of seven townlands" for her biting tongue), and pursued by the shrewd Widow Quin (subtly superb Fiona McGeown).

But what drove him to strike a spade to his father's skull? With set designer Jamie Vartan having noticeably withdrawn the traditional peasant cottage interior, leaving Barry McKinney's lighting to linger on one of those stone walls that border fields across the West, it appears that director Niall Henry is opening the play to encompass a wider landscape. The god-speaking society which displaces Christy Mahon sexually, socially and from labour is firmly in place, as is their spectacular judgement.

Curiously, Henry decides to magnify an early moment in the drama, when the pious farmer Shawn Keogh (John Carty, ever risible) refuses to attend a wake. Joe Hunt's sound design scratches a violin until building to a swell, as the publican Michael Flaherty (a towering Martin McGuire) violently swings and drags Shawn in circles. The surprising rise in music and movement registers the corrective action of a community, and with that the production's interest in a people's self-appointed responsibility to enforce law and morality.

Similarly, the audiences who attended the 1907 premiere of the play at the Abbey Theatre carried out their own public disciplinary action. Ruffled members of the Gaelic League and others who had idealised Western Ireland protested during the performance with repeated cries "That's not the West"! The stifling realism of Synge's drama, researched from his time spent in the Aran Islands, was to expose to some individuals an image of the West as merely a construction of their own making. In stark comparison, Blue Raincoat have disposed of this defining element. With the cast's procession-like entrance and their unmasked presence at the back of the stage, the affect here isn't of realism and its fidelity to real life but rather of play, ensemble collaboration and the influences of French corporeal mime technique.

Niall Henry seems aware of the pitfalls of being overly imagistic and demonstrative, calling on such effects only when required. When the community demand the punishment of Christy in the form of a spectacle, the staging delivers and becomes noticeably corporeal. A betrayed Pegeen in O'Malley's physicality retreats almost like a bird, back-stepping and rotating her shoulders in flitting motion. When the community tries to hang the fighting playboy, a strung-up Christy Mahon is specially grounded by Kelly, his body deftly balanced so as to grapple the infernal rope and spin the scene around him. What settles is a brutal display of penal punishment.

These stylistic features don't over-emphasise a staging which mines Synge's Playboy for the darkness of is punitive society, where morality ultimately twists into a knotted noose. It makes Christie's resignation from the world all the more poignant. O'Malley's Pegeen bravely withholds signs of affection until the very end, when her wild cry laments not only the loss of the playboy but also the harsh landscape that dispossessed him.

What did everybody else think?
Posted by Chris McCormack at 10:58 AM