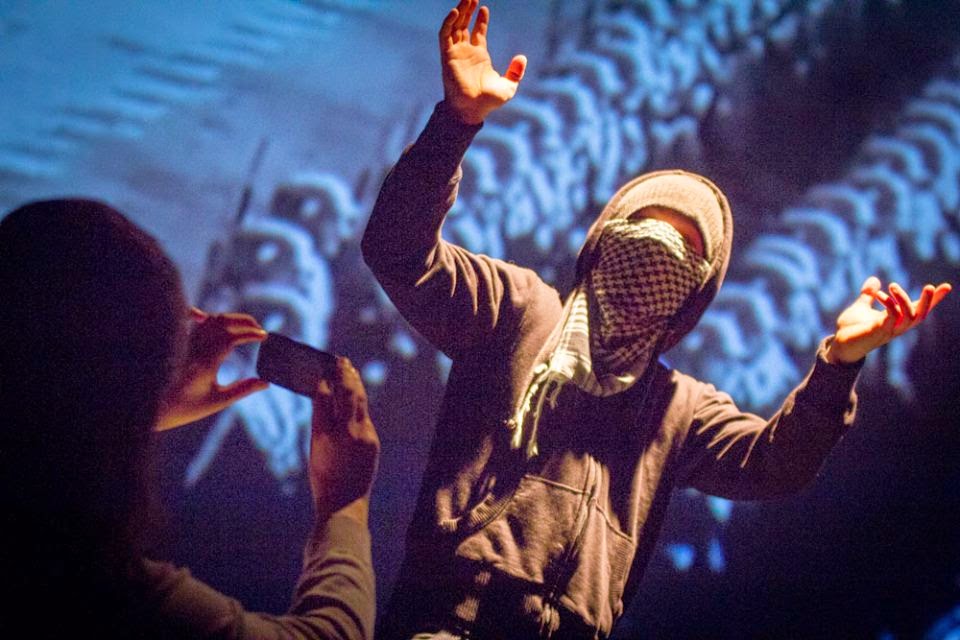 A blogger turns a chugger's life into a nightmare in John Morton's play. An apathetic generation is using the internet as a battlefield.

My review of War of Attrition by John Morton coming up just as soon as I listen to Toto in an elevator ...

178, 234 YouTube views can do a lot of damage to a person's dignity. Spirited chugger Daisy (Roseanna Purcell) becomes the un-wanting subject of a viral video after her persistence takes a toll on stuttering office worker Alan (John Doran), who has to sidestep her everyday on his way to work. Resorting to the blogosphere where he acts as an anonymous vigilante named Generalissimo Malaise, targeting the "everyday arsehole," he records a video of her having a meltdown on the street and publishes it online. Its popularity turns her life into a nightmare.

Resonating with last year's 'Slane Girl' viral phenomenon, John Morton's play seems interested in the ethics of the internet. At the same time, the humorous script is buzzing with pop culture references and makes clever use of cinematic-type 'cuts' (well executed by director Niamh Moroney and lighting designer Gerry Taylor) to comically capture the characters' emotional breakdowns. In fact, the production feels widely indebted to visual media: designer Niamh Moyles shoots the scene through a filter that psychedelically saturates the stage with yellow and pink, while Ken Maguire's video projection plays almost constantly, at one point depicting Daisy and Alan's scuffles on the street like a vintage video game.

The play suspects the realities of young people in Ireland today. Purcell, fiendishly funny and fiercely capable, conveys a lack of employment opportunity and the struggle to remain enthusiastic. Doran mindfully plays a man whose loneliness has him simulate relationships online, and in the actor's piercing physicality lashes out at the world.

The Devious company seem most savvy to explore the effects of our media society. A suspicious third character played deftly by Morton poses even bigger possibilities for the drama, a premise imaginable for a big budget thriller. Wittily spelling out an apathetic generation who use the internet as a battlefield, the War of Attrition points towards a real tension in our society, a generational gap where the older have held onto their gains in the recession years and the younger struggle to hold on to anything.

What did everybody else think?
Posted by Chris McCormack at 8:18 AM