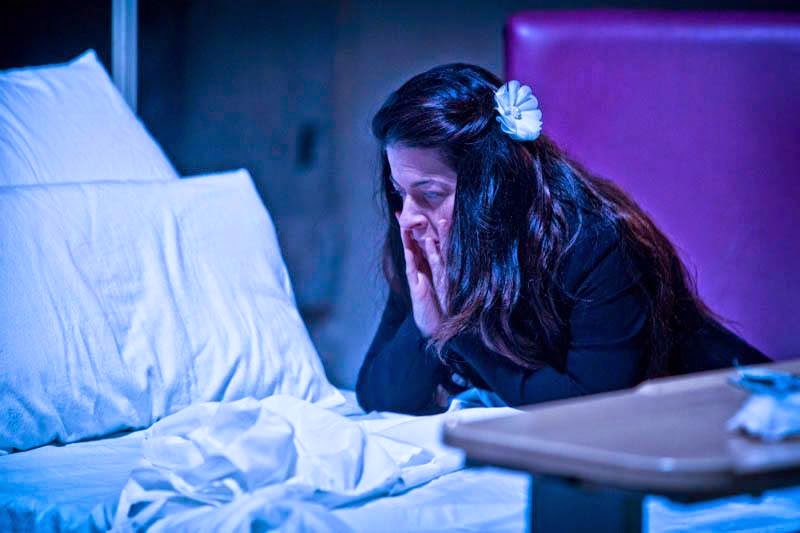 A daughter becomes her mother's home carer in Ella Daly's new play. But a healthcare system under strain poses challenges.

My review of The Lighthouse Keeper by Ella Daly coming up after the jump ...

You'd be skeptical from the opening moments of Ella Daly's new play for Amalgamotion Theatre Company. Monica Spencer's character, a soon to be discovered stroke victim, reads lines from P.D. James' mystery novel The Lighthouse; lines that don't foreground the action so much as get lodged and lost in the vaulted ceiling of the Dance Limerick space. While acoustically challenged by the vastness of the venue, the production finally unfurls with confidence, as a drama about a woman who becomes a home carer for her mother is realised.

The road to rehabilitation is long and difficult, and Ciarda Tobin's sedate staging carries every limb, considers every step along the way. Life has come full circle as the parent now needs to be cared for by the child. The latter is imbued with mixed love and lament by Joanne Ryan, her sparkling turquoise eyes regularly filling with tears. She plays well against Spencer (last seen treading the boards 20 years ago with Limerick's Island Company), who proves steadily sly as the performance progresses. There's revelation too in the cerulean set design by Sarah Jane Shiels (whose company WillFredd also produced a performance about care services this year). The high-ceiling chancel of the church building, arched and lit like a lighthouse, reveals the bathtub where a daughter bathes her mother, gently at first and then begrudgingly. Effectively, both lives have come to a halt.

The malaise is attributed to a healthcare system under strain. Georgina Miller's care professional is authoritative yet warm, working the best she can within a service with limited resources. A frosty pharmacist in Aidan Crowe's turn is similarly limited and overworked. Daly's political intention is most visible in a scene where a government minister refuses to regret cuts made to healthcare allowances, while an interviewer spells out the absence of home care as a statutory right. The affect on the home carer is straining, as Ryan's character retorts to a doctor's attempt to brush her off: "You may have other patients but I only have one mother". It's a line that shouldn't need to be forced but sadly does.

Yet there are tender moments too, and as unhurried as the play is you'll barely notice a seamless reversion to ordinary life. It's an intelligent portrait of both the personal and the institutional, asking important questions along the way. "Find out what you're entitled to", rings one professional's advice. A theatre that informs certainly helps.

What did everybody else think?
Posted by Chris McCormack at 1:14 PM