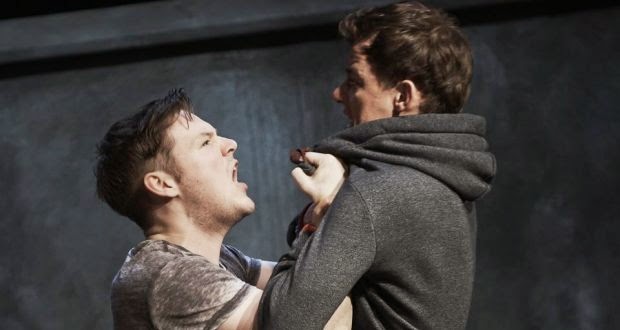 In Shaun Dunne's drama an inner-city Dublin community prepares to celebrate the paving of a waste ground. But in the face of regeneration some things never change. Photo: Ros Kavanagh.

My review of The Waste Ground Party by Shaun Dunne coming up just as soon I pass you the collection plate in a church ...

Bernie can see everything from her kitchen window. Looking beyond the comings and goings of neighbours in a Dublin estate, the waste ground recently paved into a playground suggests new opportunities. Instead, she is preoccupied with the dumping of bin bags outside a neglectful resident's gate. In the face of regeneration some things never change.

Similarly, the Abbey theatre proposes rejuvenation by producing a new writer as contemporary and prolific in tackling social issues as Shaun Dunne. Like the watchful Bernie, Dunne is profoundly knowing of life inside an inner-city community, presenting an unquestionable piece of social realism. He brings home Bernie's son Gary from college just as the community seemingly collapses between renewal and dilapidation. Strangely, after posing a number of crises, you'll find by the end of the drama struggling to find what has changed?

The play is in a position to pursue a range of relevant issues. Consider Gary, a character curiously incensed by actor Alan Mahon, and his complicated relationship with his home neighbourhood. Other adults readily inform him that he never fitted in, he doesn't speak the same language and that his connection to the area will hold him back. He is advantaged in comparison to his mate Martin, represented in another determined turn by Lloyd Cooney, who is jobless and blatantly called a "fucking scumbag". The perception is cleverly overturned as Gary's violence startlingly surfaces. Appearances can be deceiving, and the classist prejudice might have been better underscored if Niamh Lunny's costume design dressed Martin and his mother to suggest them belonging to a different social class than Bernie and Gary.

Then there is the representation of women. You'd suspect that there is a whole other drama behind Louise Lewis' single mother Denise. The role and the actor are used sparingly, leaving many questions about the character's need to uphold community morale and her relationship with men (she blushes at the sight of Gary in his boxers). We also can't locate why Bernie, wryly performed by Ger Ryan, is so cynical of change, as emphasised by her fascination with a television programme about hoarders. What largely defines her subjectivity is that her son is in college but we don't learn why that's so important. Was the same opportunity denied to her? Does she simply want Gary to avoid getting involved in antisocial behaviour at home (after all, she doesn't care to mention the subject he's studying). And what is her relationship with his Dad?

The play doesn't benefit from Gerard Stembridge's flashy direction either. An ominously flickering streetlight and the almost supernatural dropping of bin bags from the sky only threaten to de-realise the drama. The boundaries between Bernie's home and the waste ground are also blurred, disrupting the illusion as characters trespass unclearly between spaces.

Dunne gathers a real community here but it's surprising that he doesn't go after anything specific, considering his political credentials with the Talking Shop Ensemble. Therefore, you'd suspect it systematic of the Abbey company, producing another new drama unguided by Aideen Howard and the literary department. Look beyond the main stage success of Our Few and Evil Days and you'll find few exceptions (Conservatory, Quietly) in the last four years to a string of failed basics: the rise and fall of action, characterisation, and a plot that establishes a new order by the outset. Dunne's Waste Ground is filled with promise. It just happens to be part of the waste land that is the troubled dramaturgy of the national theatre.

What did everybody else think?
Posted by Chris McCormack at 4:37 AM