Wildebeest, 'On the Wire': The Sons of Munster March Towards the Somme 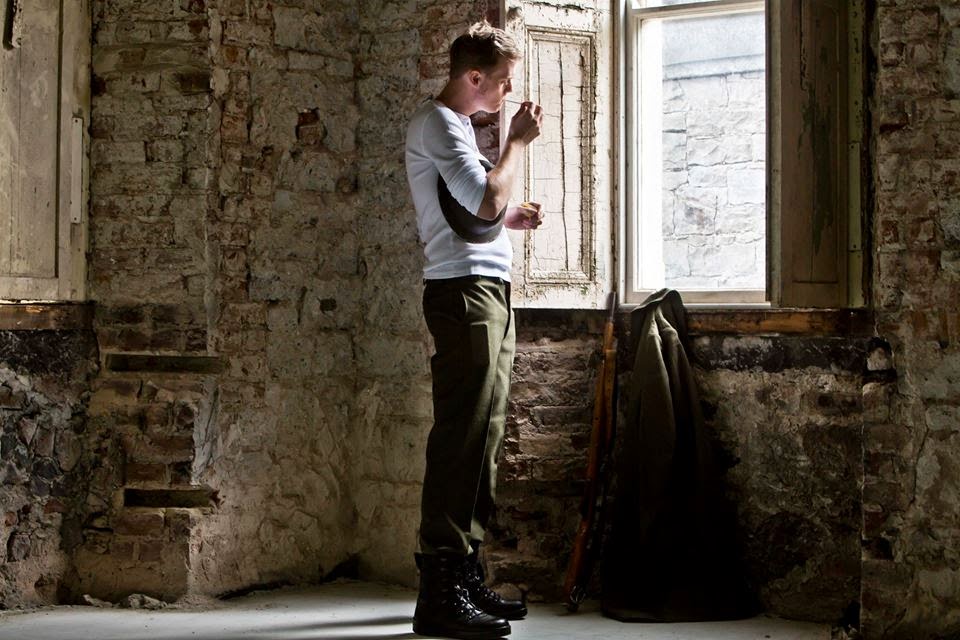 A Limerick soldier returns home from fighting in WWI. Following him inside a crumbling Victorian house to face his psychological trauma, we might confront our wider amnesia about Ireland's participation in the Great War.


My review of On the Wire coming up just as soon as I see that lightning bitch ...

A guarded soldier approaches a crumbling Victorian house, and we suspect an uneasy homecoming for a WWI veteran in Wildebeest's promenade. Any approach to this history is challenging; the sweeping tide of nationalism has whitewashed memories of the Irish who fought with the British in the Great War. While a recent installation at the Tower of London can dedicate a ceramic poppy to each Commonwealth soldier involved, in Ireland we mull over incomplete records (the common estimate is that 150,000 signed up but there is no exact number as to how many died). There is hope then that as we follow Conor Madden's soldier inside the house to face his psychological trauma, that we can also confront our cultural amnesia and retrieve this part of history.

The scene inside a dusty room is sweetly ordinary as a reunited young couple (Madden and Marie Boylan) speak playfully about their friends and community. Distracted by the image of a comrade (Shane Whisker) cutting past the doorway, it's clear that the soldier has brought the war home with him. Meanwhile, a desperate woman (amiable Amanda Minihan) keeps knocking on the door asking if he knows anything about her son who never came home from the trenches

Respecting the real-life stories than inform the production, director Terry O'Donovan never overplays the action. Madden's turn is dutifully restrained and controlled, and the greater affect is to make up a man suffering quietly. When he does lash out it's truly frightening, alluding to a another war within. Meanwhile, Boylan is in superb control. A glowing wife walking an emotional minefield is caught between affection and infliction, and the knowing Boylan embodies this contradiction with a gentle smile and a runaway tear. Her turn is wonderful to watch.

The dong of a church bell brings us back to the battlefield, and in a strain from O'Casey's The Silver Tassie a pontifical priest (striding Mike Finn) reminds us of embellishments that tried to make the war about God. It doesn't sink into Madden and Whisker's troops, who sound cheerily against each other, the latter trading tales of adventures in French brothels. Whisker is sharp as a tack.

As the interiors of The Sailor's House flake around us, we become aware that the event is beyond a period drama. Designer Norma Lowney's scenic drawing of a sandbag-strewn trench is boldly artificial, expressing the essence of the present rather than imitating the past. Along with Zia Holly's dazzling lighting and the synthesised strings of Art O'Laoire's music, the design seems to purposefully expose an obfuscation, a strained connection between past and present. These artificialities are portals into our own time, where the image of a moonlit soldier blindfolded for execution is already eerily familiar. And when a woman in black leads us into a room where thin beams of light illuminate a brigade of small clay soldiers on the ground, it feels as if we have found a very affecting memorial for those who perished.

After 100 years the Irish who fought in WWI are still widely forgotten, their stories still untold (the only new attempt in theatre that comes to mind is The Mariner). Wildebeest's admirable production rails artfully against history and conveys the crumbling of lives, soldiers who came home irrevocably changed. We exit under an archway adorned by poppies, picking up the strain of a folk song: "Shuffling Jack; they sent him home but he never came back". It represents a tragic generation of Irish men who, all too late, are at last visible.

Posted by Chris McCormack at 1:09 PM