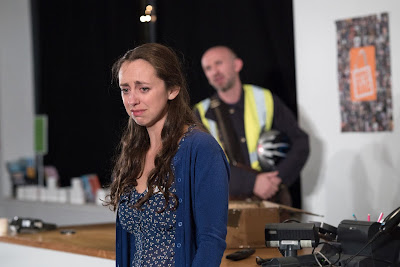 Arguing against the infallibly real has become an absurd norm, but it makes for a riveting play.

My review of End Of. by Seanan McDonnell coming up just as soon as I surmise your being and find you inauthentic ...

Legend has it that a wise philosopher once said: “I know that I know nothing”. Seanan McDonnell’s whip-smart and riveting new play for Sugar Coat Theatre almost turns Socrates’s paradox into pathos.

Literally staged in its setting, this drama finds two employees in the children’s section of a bookshop. They exchange dialogue vibrant with wordplays and publishing jokes, while keeping lookout for their huffed manager (a nicely judged Damian Gildea). But as an actor, Will Irvine’s bristly Drew is frustrated with his reliance on the day job. Though he playfully mocks Siobhán (a charming Charlene Craig) for her perpetual life as a student, it lays the land-mines for a battle between them.

It’s with the arrival of a bewildering package that director Conor Hanratty’s studied production, equipped with sly illusions by magician Davey McAuley, becomes intriguingly strange. Siobhán believes the object could be the inspiration for a new style of architecture but Drew condescendingly dismisses it as nothing exceptional. Of course egos are at play, and in these incredibly heedful performances, the truth hurts.

McDonnell knows that arguing against something infallibly real has become an absurd norm. You don’t need the obviously apocalyptic tones to identify this discreet critique of post-truth reality. It’s still one of the best-built pieces of theatre on the Fringe, and a profound reminder that wisdom perceived is better earned.

Posted by Chris McCormack at 5:55 AM