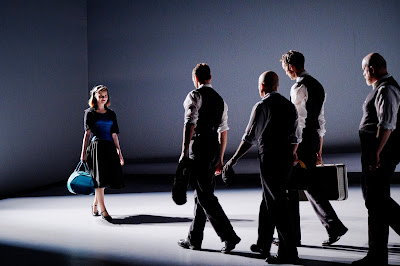 O'Brien adapts her novel for the Abbey Theatre, following two young women expelled from school and starting their next stages of life in Dublin. Photo: Ros Kavanagh


Where in the world are we? A stage as white as Peter Brook’s Dream doesn’t suggest 1950s Ireland, the setting of Edna O’Brien’s The Country Girls. Instead the neat floor of Francis O’Connor’s set extends like a scroll of blank parchment, or, for a novel once banned by the censor, maybe a page erased.

Adapted by O’Brien for the Abbey Theatre, the plot finds young Kate (Grace Collender) mourning the death of her loving mother. When offered a scholarship to attend boarding school with bawdy friend Baba (Lola Petticrew), and take a step towards becoming a writer, her controlling father needs some convincing. “She’ll go places,” someone assures him.

Those destinations were scandalised at the novel’s arrival in 1960. Expelled from the religiously cold school for writing a scabrous poem, both women start the next stage of their lives in Dublin. Petticrew’s outgoing Baba delights in racy parties and dalliances with men. Collender’s Kate, romantic and reserved, starts an affair with the married Mr. Gentleman (Steven McCarthy).

O’Brien generously allows several insights on women's lives in this era. A friendly nun (Caitríona Loughlin) is self-destined for the convent after a miracle cure saved her family. Kate’s mother (Lisa Lambe) returns from the grave lamenting the loss of her husband to alcoholism - and to sing numbers from the Celtic Woman back catalogue.

This is where director Graham McLaren’s bold production runs into trouble. Woven from haunted song and abstract choreography, on a stage as white as snow, where is the heat? O’Brien’s celebrated portrayal of women’s desire seems in danger of being redacted once again.

When Kate does undress for her lover, allowing a delicate moment of vulnerability, she has the wit to say: “I haven’t seen you yet”. That best sums up O’Brien’s unsentimental script, which takes well-aimed jabs at Ireland’s history of censorship (“It’s the Antichrist!”, someone says of James Joyce). It’s jarring to see this funny dialogue delivered against Ray Harman’s sombre music, as if the reverence of the strange otherworldly production fails to match the script.

When song performances of Moving Towards the Fair, Oh Nicholas (Don’t Be So Ridiculous) and Monto can only be taken in at a glance, it’s not easy to understand their inclusion. It’s difficult to fathom, for instance, why Kate is unearthing a flowerbed as her mother sings a ballad, while the furniture of O’Connor’s set teeters overhead.

There is something tangible in the performances, at least. Aidan Kelly holds up as Kate’s horrific abusive father, providing some much needed tension. Aron Hegarty’s nicely played poet struggles with verse but provides Kate with vision - on her sexual life as well as her writing career.

That O’Brien has borrowed the ending from the novel’s sequel provides a more impactful close, leaving Kate resolved to write a story not yet written. That is the ground broken by The Country Girls.

Posted by Chris McCormack at 7:08 AM