Gate Theatre, 'The Mariner': Off a Duck's Back 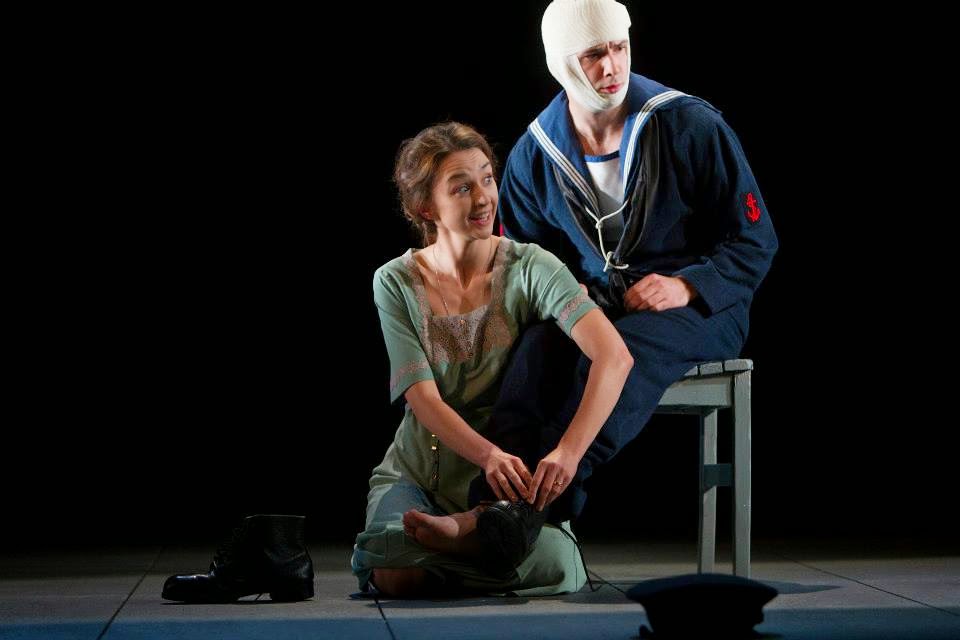 Can Hugo Hamilton's play plunge the depths of the great silence that Irish men brought home from WWI?

My review of The Mariner by Hugo Hamilton coming up after the jump ...

In Irish theatre's interplay with this decade of centenaries, the anniversary of our people's involvement in the Great War has been a most confused and quiet affair. There has been an almost lack of exploration into the event that claimed 49,400 Irish lives, with an Abbey production of the Shaw staple Heartbreak House coming closest. Sean O'Casey's The Silver Tassie stands as the powerful portrait of this part of history but seeing a production of it this year would have required a visit to the National Theatre in London, which contains its own ironies; historically, the sacrifices in the Somme in 1914 were quickly forgotten as the Irish challenge to British imperialism gathered momentum in 1916.

Hugo Hamilton's new play suggests that it takes a hundred years to understand what happened a hundred years ago. An injured sailor (Sam O'Mahony) returns home from fighting with the Royal Navy at the WW1 Battle of Jutland in the North Sea. His wife (Lisa Dwyer Hogg), married the day before her husband left to serve, ardently welcomes him home. His mother (Ingrid Craigie) is confused by his changed behaviour, which is unspeaking and un-attentive. The presumptions of a pre-war society fail to take into account a post-war traumatic stress disorder.

Diagnostically, PTSD has its origins in the trenches of the Great War but the condition went on to be ignored for years. Some experts in the arts were particularly perceptive of soldiers who came home from the war transformed. In 1925, Virginia Woolf likened a war veteran to a harbinger of truth in her novel Mrs Dalloway, whose insight into a man-made cataclysm is met with resistance from a British society fearing such knowledge would destabilise their existence. The heavily expressionist and infamously difficult second act of The Silver Tassie, written between 1927-1928, presented the WW1 battlefield not as a physical scene of combat but a psychic one, littered with religious iconography and chanting soldiers torn from civilisation.

Is it possible that Irish theatre's lack of commemoration of 1914 can be contributed to a historical chapter, in its medical and political realities, still widely mystified? If so, Hamilton's representation of a soldier's post-war trauma could be crucial. Frustratingly, the play adamantly decides to dress up the veteran as a sweet mystery to be solved rather than a survivor whose in-articulation is symptomatic of harrowing experience.

In the opening scene, the mariner's wife and mother are befuddled at his state. During their dialogue, O'Mahony is seated centre-stage, his facial expression blank, his hand repeating the same gesture as if to represent a tic. The overt image is representative of Patrick Mason's production as whole - overly stylised. You get the sense that the director and actor haven't studied the movement or affects of the real-life condition. The soldier, overly bandaged yet surprisingly neat in Joan O'Clery's costuming, feels eerily embellished.

The awkwardness of the script is to position the victim at the butt of lines that seem unintentional in their comedy. The writer illustrates the trauma in terms of language, not removed from Hamilton's own Irish-German war of his childhood, presented in his memoir The Speckled People. Yet, the broken speech reads more like a dripping of clues to his identity rather than reverberations of pain from the most hellish battlefield on Earth.

The main concern here is external rather than internal, examining the consequences of the soldier's homecoming and the various denials it brings. We are dealt the ineffective prognosis of medial officials, and accusations that the soldier is collaborating with the revolutionaries mounting the Rising. Wife Sally is happy to treat him as a blank slate to project her dream husband. The mother is convinced that the soldier is not her son and in fact an impostor. You'd accuse the play of blatant sensationalism if it decided to buy into the later.

Unfortunately, this is where drama goes, fixated on a game of Guess Who rather than the overboard seafarer. His drowning in the depths of cultural ignorance should be tragic. Instead, Hamilton's drama reasserts itself in the shallow end. Some things are just as mysterious as they were 100 years ago.

What did everybody else think?
Posted by Chris McCormack at 9:49 AM