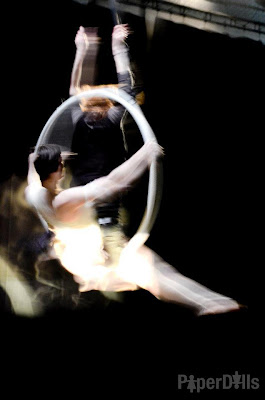 In a recent academic paper on the work of Marina Carr, the playwright was quoted as saying: “No one writes about the soul anymore”. Carr’s meditations on the soul place the concept in systematic processes of ‘birth’ (Portia Coughlan), ‘life’ (16 Possible Glimpses)  and ‘death’ (By the Bog of Cats).  Yet, even her attempts to capture the soul have been muddled lately and thus the question presents itself: in a territory that has been well explored how does one claim new ground?

Andrea Scott and her Floating World Productions sent out such a call and received responses from practitioners of visual and sound art, film, music, theatre and dance. The result is this multi-disciplinary line-up, presented in the Back Loft in perhaps the best utilisation the space has ever seen. One enters the space through a white curtain with the sweet crooning of Lioba Petrie’s cello ringing in the distance. The performance space stretches the length of the room, with the audience seated either side. Installations are situated in the aisles, one of which is a tent that contains objects that weigh 21 grams – the observed loss of weight when a body dies and attributed by some to be the weight of the soul.

What do we mean when we refer to the soul? After all, isn’t it the first abstract notion (wouldn’t the soul need to be conceptualised before religion was?) . It usually connotes an incorporeal and unique essence of a person that continues the presence of the individual somewhere beyond this life. Scott and her collaborators’ take on the subject is best summed up in a message projected on a screen during Cait Canavan and Holly Cooper’s playful movement: “ You can see your face with a glass mirror. You can see your soul with art”.

A lot of the work accesses the subject through human connections, following the logic that the soul is the unifying thing which every individual has in common, further emphasised by the sense of community Scott creates by mapping the space into a horseshoe shape and placing everyone in close quarters. Canavan and Cooper strike this chord though the effect is more sentimental than revelatory and their efforts to mirror each other’s actions can be imprecise. Sue Malone and Shadaan Felfel’s dance’s is a bolder play, starting off as an absurdist one-sided conversation but an intimate duet then reveals their synchronicities of being. Unfortunately, the performance was muddled by the low volume of the dancers’ speech. I think former circus kids/aerialists Paper Dolls captured the sentiment best with their stylistic turns from a mid-air hoop as a dark musical score played behind them. The spell of the performance was so effective that at times when the women were intertwined in the spinning hoop their physical beings seemed to melt into one. Fantastically intrinsic and hypnotic.

As the evening played out the approach of revealing the soul through co-action was recurring. Therefore, the solo acts brought some nice daring to the event. Elizabeth Hilliard’s soaring vocal captured an invisible and supernatural presence with Trevor Furlong’s projections growing behind her. The length of the piece does rob it of its climax though. Rebecca Reilly’s dance with Furlong’s movement-sensor visuals was truly inspiring. As the geometric graphics responded and anchored themselves to Reilly’s movement, the effect created the most tangible impression of the soul of the night: a correlation of the physically human and the ghostly digital.

This is an exciting venture by Floating World Productions, and just as admirable as the work featured is Scott’s ability to mobilise so many exciting members of the arts community. More please.

Posted by Chris McCormack at 4:15 AM