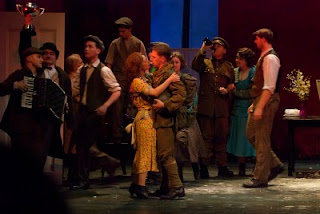 “There it is, the Silver Tassie, won by the odd goal in five, kicked by Harry Heegan”
– Harry Heegan
“Thirty days hath September, April, June, and November –
November – that’s the month I was born”
– Croucher
“Our best is all behind us – what’s in front we’ll face like men, dear comrade of the blood-fight and the battle-front”
– Teddy Foran

It’s 1928, and W.B. Yeats is writing Sean O’Casey a letter. As artistic director of the Abbey, Yeats is writing to inform O’Casey that his latest play will not be produced by the theatre. O’Casey had written a tragic-comedy epic about Irish soldiers in the First World War, but Yeats finds that the writer has no claim to conceive the conditions of war – “You never stood on its battlefields or walked its hospitals”.

It’s August 2010 and I’m catching regular sightings of Aaron Monaghan, Aoife Duffen, Derbhle Crotty, and Bush Moukarzel on the streets of Galway.
They’re all in town rehearsing for Druid’s production of The Silver Tassie.


In the eighty-two years in between, O’Casey’s play earned a reputation for being the most problematic of his works. Its production history is littered with creative misfortunes and negative receptions, as well as partial success. History suggests that there is something inherently flawed about The Silver Tassie. Perhaps it’s the fault of any creative team to successfully materialise O’Casey’s vision, or perhaps the playwright himself is to blame for a scribbling a sanity that seems unfit to appeal to the sensibilities of an audience.

Druid’s The Silver Tassie juggernauts through O’Casey’s play with the vision of Tony-winning director Garry Hynes(*), who climbs to the challenge at hand with a command of theatricality that is epic in manifestation. O’Casey’s community of Irish working-class lampoonists, soldiers and hypocrites are realized by a wonderful cast. Together, Hynes and company bring us from the tenements of Dublin to the torched trenches of World War I France to the ignorant engagements of post-war Western society, armed with a battalion of poetry, song, and dance. Also present is O’Casey’s distinct language revelled with what Arthur Miller described as a “wit and humour that reached out to audiences who might otherwise have dug in their heels against a strictly sombre confrontation with the social realities he was bent on sending forth”. The production is unmistakably Druid. There is something of a diasporic ‘Irishness’ of the past in the sensational language and artistry that this company’s work subscribes to.

* On further thought, what other Irish director would really be able to rise to the occasion?

Along with the momentous production values and talent, it is the curious nature of the play’s often considered problematic, but potentially genius, second act that puts The Silver Tassie number four on my list. With young footballing champion Harry Heegan having left home for the trenches with fellow youngster Barney Bagnal and grown brute Teddy Foran, act two takes us to the site of a destroyed monastery on the battlefield. The stone wreckage and remnants of religious artefacts are slowly delivered to us from the shrouded darkness. The atmosphere is incredibly tense, and cut through it is the presence of a towering monstrosity at the heart of the apocalyptic set – an armoured tank, with its cannon rotated over the heads of the front rows of the audience. This colossal warhorse is sinister and insistently unnerving as we wait for the inevitable explosion to erupt from its gun turret. Climbed atop of the machine is the Croucher (played by Monaghan in a resemblance to the play’s main character) – a soldier covered in mud and blood whose actions are animalistic in nature – who surveys the events of the scene. This act is different than the other three. Whereas the other acts are naturalist in their claims to realism, sculpturing physical realities such as tenements and hospital wings, O’Casey has planted an expressionist bedrock underneath his battlefield which endows soldiers with liturgic chants, prayers, and songs. There appears to be no association with the previous act in style or reference to the other characters. This act stands alone, leaving behind The Silver Tassie of the first act for a new territory of human rendition.

There was something of a cultural amnesia in literature in regards to society during World War I, as writers seemed to lean more on the realities building to the succeeding war. Virginia Woolf honed in on the conditions of veterans returning from war whose consciousnesses seemed to be fractured by the violence they experienced in the trenches. The realisation of ‘post-war trauma’ was not an immediate concern for Western society, the consequences of which are portrayed in her novel Mrs. Dalloway. The novel juxtaposes the social engagements of London socialite Clarissa Dalloway and war veteran Septimus Smith whilst painting each individual cognizance with a stream-of-consciousness style signature of Modernist literature. While Mrs. Dalloway can draw on the successes of her social integration to keep intact her cohesive consciousness, Septimus’ mental stability has been burned by his exposure to the violent capacity of human nature, and thus cannot find a resemblance to honour or selflessness in those who surround him.

O’Casey also came to identify this post-war trauma, and dedicated his second act of The Silver Tassie to capturing these psychic injuries with a decimated landscape littered with religious iconography, mechanised monstrosities, eerie poetry and spectral fears. The soldiers here are in a process of mental destabilization, standing on the periphery of civilization, their social realities back home being burned away by the sight of human nature at its most primal. Therefore, perhaps this departure in the second act is not only appropriate, but in fact necessary to achieve the gravity of O’Casey’s intentions. These wounds belong to a psychological realm, and perhaps an expressionist style of writing can illuminate the torching of these consciousnesses more so than a naturalist one.

It’s a question Irish theatre buffs will continue to debate for the next eighty-two years and more.

Posted by Chris McCormack at 2:13 PM