Everything I Do review: Mesmerising gig theatre, in tune with all-consuming love 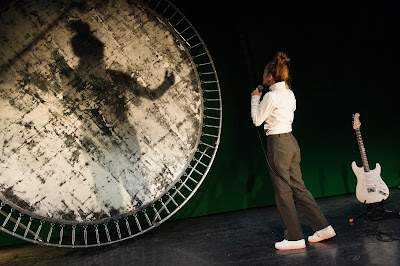 My review of Everything I Do by Zoe Ní Riordain coming up just as soon as I meet an alien ...


“I want to help you,” sings alt-pop musician Zoe Ní Riordáin, strumming a guitar with gentle motion. Wholeheartedly sincere in sound and presence, her new “live action album” begins with gestures of devotion necessary for a set of love songs.

But Ní Riordáin and director Maud Lee have previously used music and stagecraft to suspect what’s under the surface of human interactions. Here, when she sings “You make me weak at the knees,” Ní Riordáin drops to the ground before crawling dejected to the back of the stage. Stark movement suggests the strain of something unsaid.

What we end up getting is mesmerising gig theatre, in tune with all-consuming love on songs such as My Race is Run, No-one Ever Will and Disappointment 2 U. Lee’s production, made surreal by Fenna von Hirschheydt’s spectacular lighting, moves into an otherworld where Ní Riordáin, impassioned and wry, expresses her desire and loneliness with striking set pieces and a costumed superhero (Aoife McAtamney). Though some songs feel like they need more context to belong.

Yet, there is something reassuring about appreciating the heartbreak, reflected in an ingenious transformation in Ger Clancy’s stylish set. A trampoline, much like a weight, has been lifted.

Posted by Chris McCormack at 5:14 PM