THEATREclub, 'THE THEATRE MACHINE TURNS YOU ON VOL. III': A Revolution Is A Change Of Mind 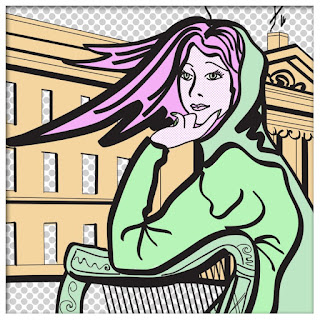 Last night I attended the opening night of THEATREclub's THE THEATRE MACHINE TURNS YOU ON VOL. III. My thoughts on the evening coming up after the jump ...


Perhaps it's because I've just moved to Dublin, that I'm better able to survey the city than in my commuter days, or maybe I've been oblivious and it's been like this for a while. But if you were to locate the pulse of the capital right now it would be on a bulging vein.

There is a lot of anger here right now.

The past few weeks alone have seen 3000 march against disability cuts, 1000 march against austerity measures on Budget Day, 400 protest against home help cuts, 10,000 gather in memorial of Savita Halappanavar and subsequent marches from both pro-life and pro-choice movements, and there are fears that Willie Frazer's "tongue in cheek" protest to Leinster House to lower the tri-colour flag this Saturday may see a repeat of the riots in 2006 during the Love Ulster march.(*)


(*) Update: The Irish Times are reporting that the protest has been postponed to a later date.


There is a lot of fear and anger here but over in Project Arts Centre a cultural revolution is underway. THEATREclub's mini-festival THE THEATRE MACHINE TURNS YOU ON returns for a third installment, this time waving the tagline: "A revolution is a change of mind". The mood at the THEATRE MACHINE is ecstatic and completely hopeful that the frustrations and anxieties of a society can be channeled into progress and resolve.

The evening's performances are divided into categories, beginning with a 'Demotape' or work-in-progress, which on this particular evening is Neil Douglas's we didn't care when  - a play/performance lecture about the young man's reaction to his mother's cancer diagnosis. Douglas is a charming act with some nice tricks up his sleeve. Whilst doodling on his computer a game of minesweeper becomes a metaphor for the assailable nature of human cells to cancer. The performance leaves you wanting to hear much more though, and Douglas's final admission - that he's guilty of how he reacted to his mother's illness - feels more like the true beginning of the piece rather than the conclusion.

'New Releases' then have an emphasis on new work from new artists, the slot filled this evening by the newly established collective PETTYCASH and Oisín McKenna's play Writer/Performer/Salesman (A New Play About Retail). From fast food to homeware, working thirty hours a week while earning minimum wage, Oisín McKenna feels his creative self being crushed by the demands made of an 'independent adult". It's a dilemma that many know well, and Oonagh Murphy knows this as her subtle direction situates us intimately with the performer. McKenna's writing is slick, and manages to capture the typicalities of the workplace along with the complex relationships of perhaps half a dozen colleagues over the course of a few rhyming couplets. What ultimately emerges is a manifesto discipling the Artist, to allow time at the end of the work day for being creative, whilst at the same time serving a critique of cultural attitudes towards art and lifestyle.(**) As McKenna says himself: "Searching for eternal beauty and truth is only limited on the morning commute".


(**) Is anyone else curious to see a combination of Postmodernism, Foucault, Kant, early Kylie Minogue, and the throaty woman from Grafton Street?


Gemma Collins and Stephen Lehane's ambitious Tell is the 'LP' of the night. The performance provides a history of oralism in the education of deaf individuals, that is, an emphasis on lip-reading and speaking words that the speaker will never hear as opposed to using sign language. In 1947 oralism was introduced in St Mary's School for Deaf Girls in Cabra, segregating the students. Joined by Dylan Coburn Gray, who provides a sonorous sound design, the three performers create a haunting atmosphere of failed communication and seclusion. Sign language was forbidden and punishable, as conveyed in a brutish sequence where Gray contributes the raw soundbites of hitting himself to the looped sound design. This tech-savvy production has some significant revelations, especially about those who were taught through oralism but were ultimately unable to segregate in society. There are a few tuning problems though, particularly the establishing of the performers' relationships with each other, which would make clearer the tensions between them. Regardless, as with WillFredd Theatre's Follow, it is still exciting to see the dramatic possibilities for sign language onstage. 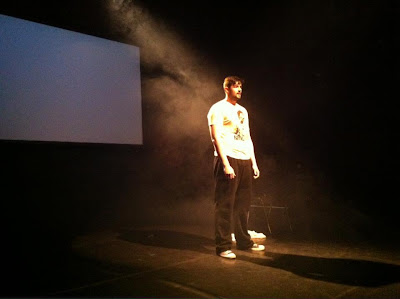 Finishing the night, from the 'EPs' category, is Confusion Boats (pictured above). It's hard to imagine anyone could ever beat up Gerard Kelly - who is one very tall, very buff guy - but when he was eight ("or nine") years old someone did just that, and that prompted him to go into training. Under Grace Dyas's evocative direction, Kelly springs to his feet into his own Rocky montage, swinging a skip-rope at lightning speed. What follows is a meditation on masculinity - a de-romanticisation of protective role-models and superheroes. There is a violence pulsating through Confusion Boats, making masculinity intrinsic with aggression, using effective references to Enter The Dragon and Raging Bull. Kelly himself is hesitant to make a message from the performance. Instead he uses video footage at the play's conclusion to do it for him. (***) This dark production raises some interesting questions, principally about how we can adequately defend ourselves against the most destructive weapon on the planet: Man himself.


(***) Does anyone know who that man was in the footage at the end of 'Confusion Boats'?


Gerard Kelly's 'weaponisation' of Man sticks out in the THEATRE MACHINE line-up, which features a few productions which look at female identity, such as Sorcha Kenny's DOLLS and the cabaret Eve Speaks by Ali Matthews (a.k.a. the brusquely named Bitchuationist), both of which will be written about here.


What did everybody else think of these four productions? And what will you be seeing in the THEATRE MACHINE?

Posted by Chris McCormack at 11:50 AM