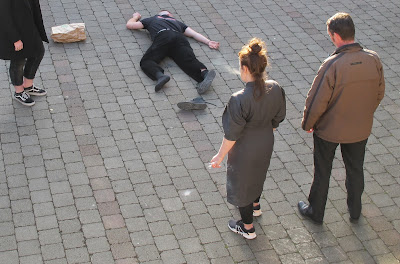 My review of Oneday by Dick Walsh coming up just as soon as I play Count Dracula on Broadway ...


Scan an old issue of the Connacht Sentinel, handed to us at the beginning of Oneday, and you'll find a story about Occupy protestors, bracing to be evicted by police. It prompts a question that resonates still: how best to challenge inequality?

When playwright Dick Walsh attempts to argue a solution, informed by media articles, he’s met with an incredulous response: “What do you know”? It’s a fair question.

Framed as an experiment, this play reconstructs a day - March 13th, 2012 - with news reports. It makes for striking and revitalising avant-garde theatre. It’s incredibly stealthy, for instance, when an actor (the meticulous Shane Connolly) retrieves the details of a massacre in Syria, only for his personal failures and strongly held beliefs to be brought to light. Can he be trusted?

In some of Walsh’s earlier productions the stagecraft took less risk than the writing, but this rich work, co-directed by James Moran, contains a wealth of references to international theatre, from Forced Entertainment to Richard Maxwell. A horrifying rampage by a U.S. soldier is recreated with intense displays - Aine McBride's campsite set is made fiery by Ciarán O’Melia’s lighting, while the production focuses on Brian Walsh's visceral drumming. With such tenacity a reported event, possibly on the verge of evanescence, may find renewed expression onstage.

Fittingly in an absurdist play, both theatre and journalism will be made appear useless by the end, but that confusion is surprisingly liberating. It’s the conviction to understand that’s compelling.

Posted by Chris McCormack at 6:33 AM