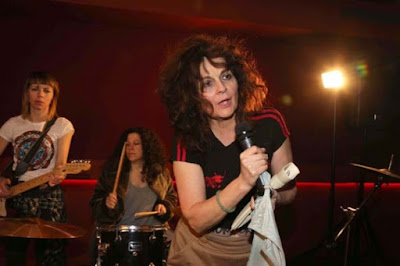 My review of Shame by Pom Boyd and Seán Miller coming up just as soon as I smile ...


“You’re not the audience I expected,” says Pom Boyd with annoyance, early in Shame. Despite arriving on time it seems that, in this arch production, we’re something of a disappointment.

Throughout a piece of garage rock theatre, dissenting and triumphing, Boyd and composer Seán Miller give paralsying self-doubt the longed-for pathos of a rock song. “Why do you feel the way that you do?” they sing.

Boyd, studied like a comedian in self-deprecation, takes us through a history of personal humiliations. There are failed exam results and some embarrassing dancing in front of a boyfriend. Subtle touches by her band mates, however, suggest a more complicated upbringing. Sarah Kinlen is nicely jaded as a youth frustrated by what’s expected of her, while a twinkling projection of waltzing couples becomes tinged with shades of mental illness.

In Miller’s excellent music, a teenager’s years of rebellion and self-medication will be evoked with blasts of punk guitar and drum, before the distress between two adult lovers is let sadly linger with Kim V Porcelli’s expressive cello.

It’s thrilling to see Boyd revisit these torments with self-assurance. Yet, what at first seems like an exercise in composure becomes something immensely compassionate, as we learn about her mother’s own struggles with being an actor. This is the shame that blinds and confuses, and the production pulls down the curtain once and for all.


Posted by Chris McCormack at 8:06 AM