Dublin duo Feidlim Cannon and Gary Keegan got off to a rough start. Their dedication to finding new theatrical forms started with a radical restaging of Philadelphia, Here I Come!, which landed them in a spot of trouble with Friel’s lawyers. The experience obviously didn’t discourage the Brokentalkers as they went on to make some of the most imaginative and emotionally resonant work in the past few years. Their back catalogue includes Track – an audio-guided tour of Dublin from an immigrant’s perspective; the Dublin Youth Theatre collaboration This Is Still Life, which implored the melodramatics of youth with sweet sentiment; the long-distance two-hander In Real Life – a moving portrait of human connection that was delicately intimate despite one of the leads skyping from Belgium; and the gorgeous Silver Stars, which featured a male choir that told of the real-life experiences of gay men in Ireland. Cannon and Keegan have honed a stagecraft that fantastically dances not only with our conventional expectations of ‘theatre’ but also with the experiences inherent in contemporary life. With The Blue Boy, the group are looking at the societal imprint of children’s experiences whilst incarcerated at Catholic residential care institutions.
Despite their portfolio, funding bodies are criminally negligent of supporting Brokentalkers, leaving the fate of The Blue Boy uncertain. Ulster Bank Dublin Theatre Festival seem to want it as part of their programme in October, and thus both have launched an initiative with www.fundit.ie  appealing to the public for donations, where they hope to accomplish their 3,000euro target in five weeks. If the target isn’t reached, Brokentalkers cannot produce the show.
I do believe that The Blue Boy is a very important project. If you are wanting to support the arts in some capacity I would recommend starting here.
For more details –
http://www.fundit.ie/project/the-blue-boy-in-development
Trailer for The Blue Boy –
http://vimeo.com/15835250
Posted by Chris McCormack at 3:09 PM No comments: 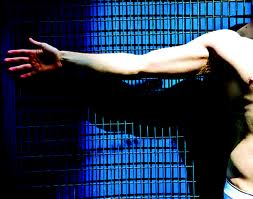 As happened in November, my self-disciplined ways suffered a bit of a setback this month. However, we’re back up and running and expect some regular postings here in the next few weeks as there are a few shows I am planning on going to. This month’s listings are astronomically late, but better late than never right?
There is a lot to admire in March 2011 as the month mainly pays its dues to original and new theatre. This is seen on the utmost funded level with the Abbey’s presentation of three new plays by two contemporary voices. The institution’s diluted commitment to original work is one of its sorest subjects, and rarely do we have the opportunity to see new Irish writing on its stage (Thomas Kilroy’s Christ Deliver Us!, Michael West’s Freefall, and Carmel Winters’ B for Baby are the only examples in 2010 I can think of). Nancy Harris’ Bad Romance (until Apr 2) is described as a “tender and funny tale about our secret selves [that] observes the search for connection in a fractured world”. Female authors and writing that is distinctively ‘female’ is extremely under-developed in this country, with Marina Carr the most notable author of recent times. The very circumstance of having Harris’ work on stage may be cause for celebration but let’s hope that she’s capable of a discourse that is engaging and insightful that will want us to keep her around. Also: Wayne Jordon (Ellamenope Jones) and Janet Moran (Freefall) are attached so it could be a nice show.
The other two plays in the Abbey come from scribe Paul Mercier. I am curious as to why Mac Chongail is investing this heavily in Mercier to supply the goods. His past writing for the company must have brought home the gold. First we have The Passing (Mar 11-Apr 16) which is a story about a woman revisiting her relationship with where she grew up when her parents’ house goes for sale. The East Pier (Mar 18-Apr 16) then is a two-hander with Andrea Irvine and Don Wycherley described as “a chance encounter between two stray souls who discover they are still as deeply connected as they are strangers to one another”.
I’d probably be more inclined to go to THEATREclub’s ‘Spirit of the Fringe’ winner Heroin (Mar 24-26, pictured above) at the Axis Theatre in Ballymun. The show is the product of co-founder Grace Dyas’ research into the social history of heroin-use in Dublin and society’s wilful ignorance of it.
Read more »
Posted by Chris McCormack at 11:19 AM No comments: 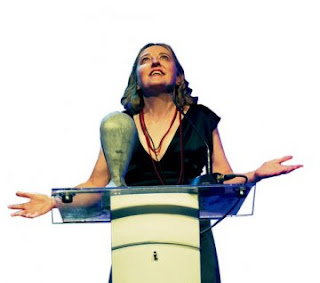 The best of Irish theatre was celebrated last Sunday in Vicar St. I don't have much to add to my thoughts on the shortlist (link to that post below) other than it's fantastic to see Pan Pan win 'Best Production' for The Rehearsal, Playing the Dane and Aedín Cosgrove (pictured above) to pick up the 'Best Set' trophy. The judges showed an open mind with the 'Best Production' category this year, with Pan Pan and Anu Productions representing the postmodern practice that's growing in presence with the likes of The Company, THEATREclub and others who are finding new ways to engage with theatre space. Before all of them there was Pan Pan (who turn sixteen this year, I think), and Sunday was a historic win not just for them but the generation of artists their work has inspired over the years. It's exciting to be a theatre maker in this country right now.

Posted by Chris McCormack at 10:03 AM No comments: