We Can't Have Monkeys in the House review: A dark surreal comedy about traumatised sisters 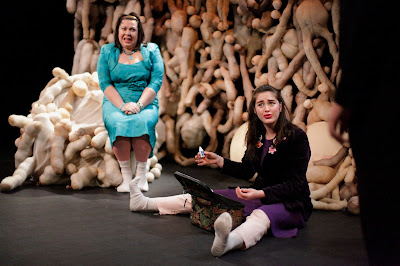 A woman is reunited with her sisters to fulfil their mother's dying wish in Ciara Elizabeth Smyth's affecting new comedy.


John, a woman who’s been away for many years, finally returns home. Harried like a murder suspect by her vexed sisters once she arrives, it’s a lively family reunion, in Ciara Elizabeth Smyth’s new surreal comedy for The New Theatre.

On this fraught occasion, the women’s mother has slipped into a coma. John (Aisling O’Mara), reappearing after a long exile, has come to help fulfil her last requests. It’s clear in director Olivia Songer’s impressive production that she’s stepped into a traumatised house. Naomi Faughnan’s apartment set, decorated with homemade monkey sculptures from a deranged art project, uncannily recalls both the female body and the damned souls of Gislebertus’s Last Judgement, as if there were a link between the two.

Though John’s sisters are loathsome (they refuse to use her preferred name Jo), Smyth generously allows us to see the reunion from each of their perspectives. Neil, an infantalized woman played by a quick-witted Meg Healy, impresses others with her dance skills. Danielle Galligan’s brusque Cinnamon assures herself with the fantasy of being worshipped as an online influencer. Most significantly, Lesley, given a terrific performance by Camille Lucy Ross, has the priggish superiority of someone holding a lifelong grudge.

When Cinnamon insists their mother left a lost DNR, John uses a memory-building exercise to recreate events and find it. But such efforts get derailed by her sisters’ living room games, jumping into the characters of a murder mystery, as if suspending an overwhelming truth about their lives. That’ll remind some of Enda Walsh’s The Walworth Farce but Smyth’s play is more surreal in form. When Cinnamon leans threateningly towards John, for instance, lighting designer John Gunning momentarily creates the spotlight of a gruelling interrogation, before snapping back to reality.

What everyone is avoiding here is the puritanical rages of a parent who wished she had sons instead of daughters. Smyth’s last comedy, the hilarious All Honey, couldn’t quite resolve the cartoonish touches of farce with the sobering hardship of human connection, but O’Mara’s lucid performance makes an affecting link. Elsewhere, Ross stunningly holds onto the gestures of an offhand comedy while giving a less exaggerated display of pain, that of being abandoned by her sister.

The ultimate effect of Smyth’s dark play, then, is to go on an exhilarating spin, during which you gradually take in the details of a corrosive poison: the shame that starts in the home.

Posted by Chris McCormack at 4:26 AM