Asking for It review: Home truths on rape culture in an outstanding production 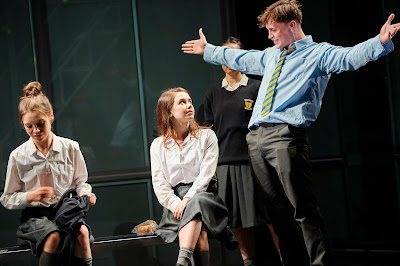 If people’s souls are tied up by law and public opinion, someone once wrote, it is more tragic to leave them wither in these bonds. Louise O’Neill’s acclaimed novel seems to take Bernard Shaw’s advice as its plot structure.

Published in 2015, Asking for It anticipated the essential testimonies and agonising court trials of recent days. Given an outstanding adaptation by Landmark Productions and The Everyman, in association with the Abbey Theatre and Cork Midsummer Festival, it puts new shape on a frightening rape culture.

For instance, when we first see Emma (Lauren Coe), a young woman in school, she’s held in elegant pose by a vast projection. The image foreshadows the struggles of a woman who’s raped by local sports stars and exposed by social media. Distrusted by phone-in radio shows, newspaper columns and comment sections, she's scrutinised until nothing personable is left.

Director Annabelle Comyn’s riveting production is similarly blanched. The glass walls of Paul O’Mahony’s set, resembling school architecture, is made grey by Sinead McKenna’s lighting. It’s telling that the stage occasionally finds colour in the threads of a football captain’s jersey, or the strobes of a grubby house party. Not too long ago, directors would have seized that grime as reason to get lost in the fog of a psychedelic trip. O’Mahony’s stylish set, cut like a prism, works to make such overconsumption transparent.

As the second half closes in on Emma’s house, showing a family divided and harassed, the production gets across significant home truths. There are preparations for a gruelling court trial that has already confiscated evidence, and will compel the victim to detail her sexual history. With parents terrified of damaging their reputation (including an ice-cold Dad played by Frank McCusher), it’s down to a worrying brother (the excellent Paul Mescal) to talk sense.

Nowhere else will you see such gut-wrenching scenes of puritanical silences and victim blaming. The closest play is probably Consent, Nina Raine’s drama about the grey areas of a rape trial, leaving the particulars of the case for the audience to decide. By comparison, Asking for It, which will be described as harrowing and gruelling, is a much more sympathetic work.

The unsparing but insightful production is subtly summed up early on, in a student's purposeful delivery of a class presentation on global warming. Sudden change is abrupt, but incremental change, much like O’Neill’s fiction, takes steps towards an end result.

Posted by Chris McCormack at 7:48 AM