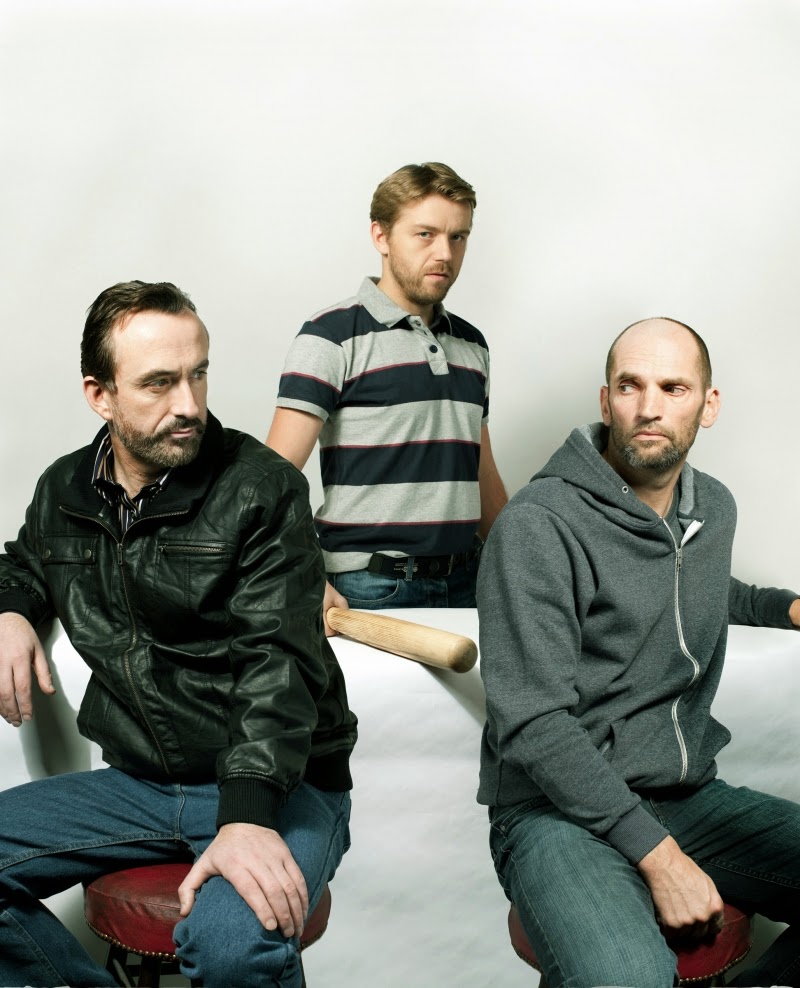 McCafferty's play exposes the influences of violence in 1970s Belfast. But will reconciliation be that simple?

My review of Quietly by Owen McCafferty coming up after the jump ...

Read more »
Posted by Chris McCormack at 3:57 AM No comments:

The New Theatre, 'The Assassination of Brian Boru': Who's Good Enough for Clontarf? 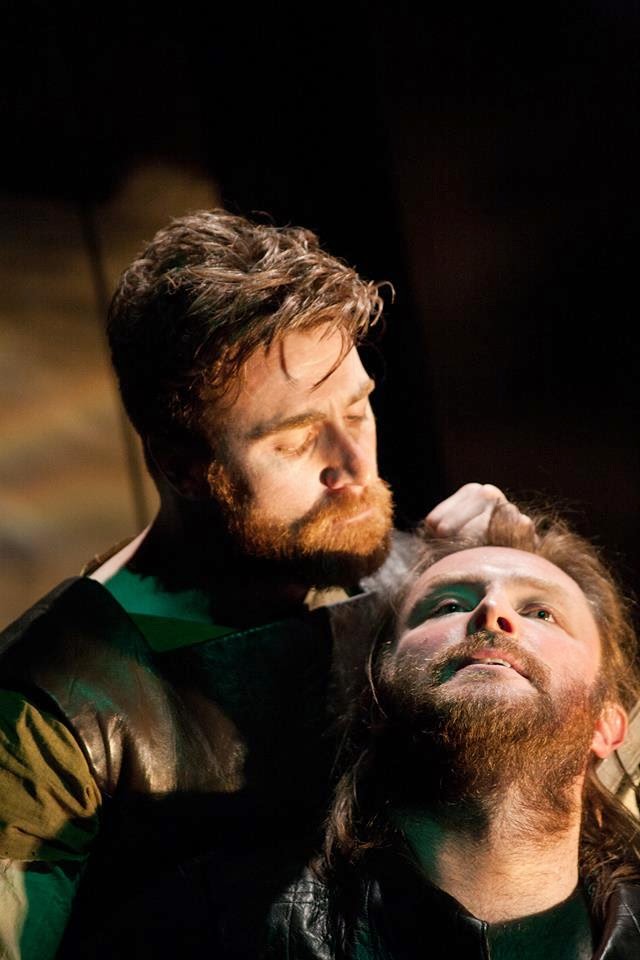 While the historicity of accounts describing the Battle of Clontarf has been in dispute for 75 years, it is widely accepted that Danish brothers Ospak and Brodir were involved in events leading to Boru's death. Photo: Al Craig.

My review of The Assassination of Brian Boru by Lauren Shannon-Jones coming up just as soon I never tire of my brother's stories ...

Read more »
Posted by Chris McCormack at 3:49 AM No comments: 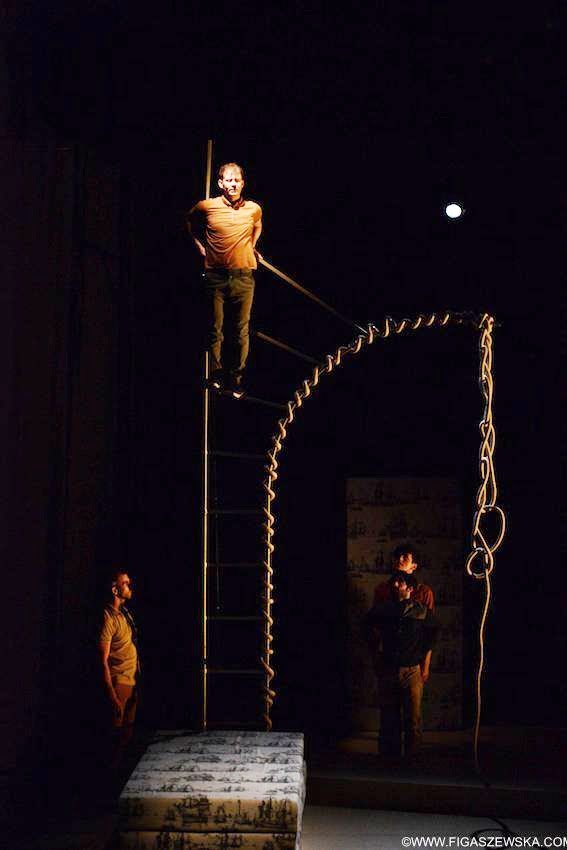 The male psyche is in steep descent in Junk Ensemble's dance production, and falling flat on your face seems inevitable. Photo: Ewa Figaszewska.

My review of The Falling Song by Jessica and Megan Kennedy coming up just as soon as I do some cloud choreography ...

Read more »
Posted by Chris McCormack at 5:26 PM No comments:

CoisCéim, 'Swimming With My Mother': Like a Duck to Water 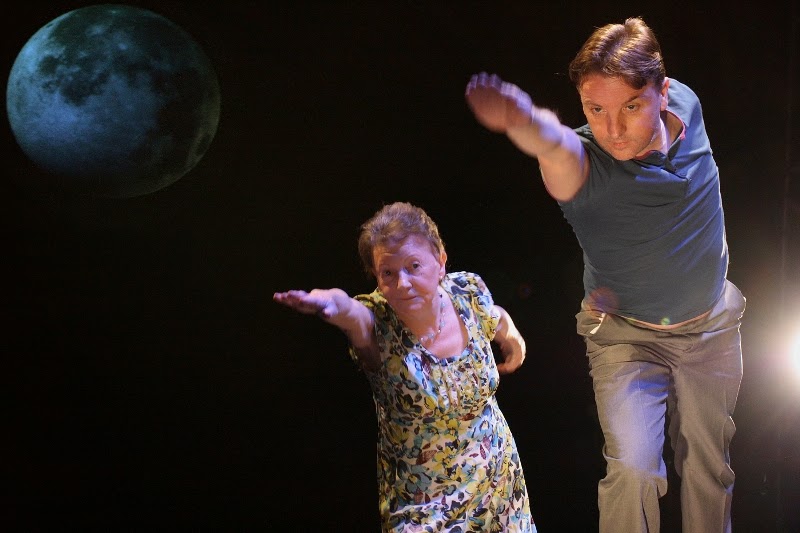 David Bolger revises his swimming moves in this sweet duet between the choreographer and his mother.

A few quick thoughts on Swimming With My Mother by David Bolger coming up just as soon as I don't look at my feet ...

Read more »
Posted by Chris McCormack at 10:48 AM No comments: 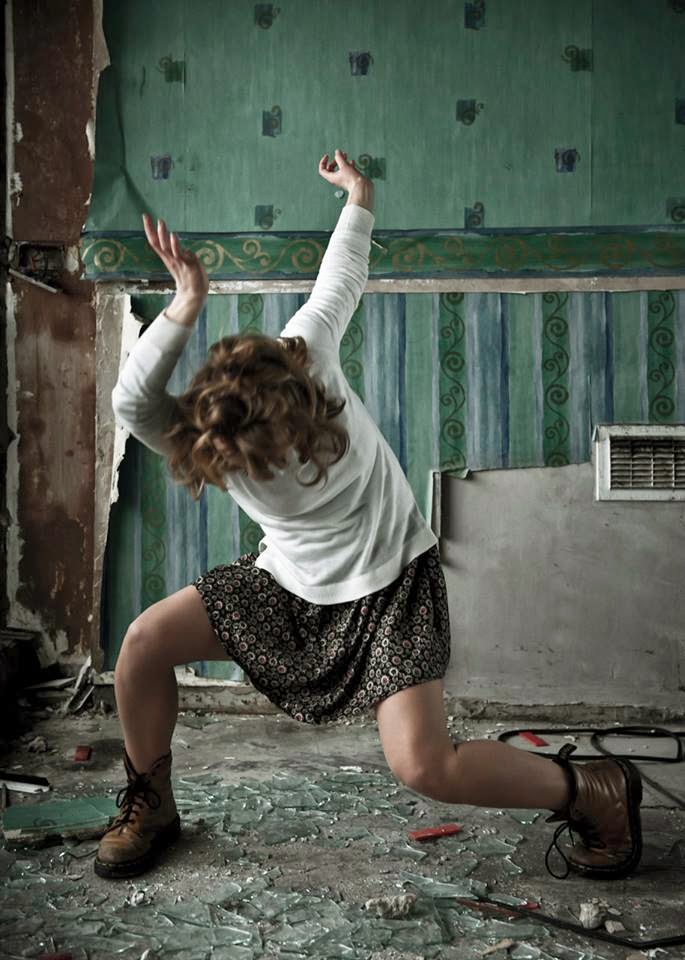 Women's bodies are beaten down in Catherine Young's visceral dance. How will they be able to stand back up?


My review of Woman Stood Regardless by Catherine Young coming up after the jump ...


Read more »
Posted by Chris McCormack at 5:19 PM No comments:

I Walked Into the GPO With a Typewriter and a Revolver 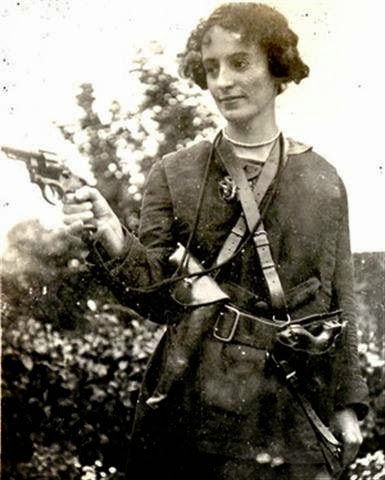 On April 2 1914 a group of women met in Wynn's Hotel on Dublin's Abbey Street to discuss the formation of a woman's organisation to lend support to the Irish Volunteers. Under the constitution of this women's league, Cumann na mBan, they were to “teach its members first aid, drill, signalling and rifle practice in order to aid the men of Ireland”.

The doors of a function room push open to reveal a gathering of women in high societal gowns. "Play or Watch?" you could be asked, before requested to take a seat at the table. As for those of us left to stand, we quickly realise why. A man from the audience gestures to take a seat and is met with a resounding "No"! 100 years ago, we weren't invited either.

With the clink of a teacup they plunge into discussions, asking if Irish society has achieved genuine equality for women. As they hash out positions on pacifism versus activism, Irish language and domesticity, the men are left silent and observant.

Louise Lowe's direction then jolts us out of the naturalist scene, with the performers giving to physicality(*), gesturing the raise of their skirts. Even in the advance of freedom, Woman can't escape the sexual liberties that have been made of her.

(*) Two gestures - a sideways slam of the body on the table and a raising of the hand across the forehead and mouth - were recurring motifs in ANU's 'Thirteen', which suggests that they're part of a mythology that isn't limited to the company's connection with the Dublin Lockout.

A military-dressed member of the women's league, played with pride by Laura Murray, stands on the table and gives an account of entering the GPO during the Easter Rising with a typewriter and revolver, making her Winifred Carney - the only woman to be part of the seizure of the building. Later on, Murray describes clenching a white flag in her hands, meaning she has taken on Elizabeth O'Farrell, the go-between sent to negotiate Pearse's surrender on behalf of the rebels.(*)

(**) Like how 'Thirteen' revealed female figures such as Rosie Hackett and Dora Montefiore who aren't well documented in Irish history, I expect we'll learn about more extraordinary individuals from ANU's work in the coming years. I wonder if we'll see a return of Derbhle Crotty as the theatrical and radical Helena Moloney, who during the Rising fought as a sniper against English soldiers at Dublin Castle.

Revealing startling images of a battlefield with bullets in the air and skulls on the ground, ANU's commemoration is a far cry from the maternal 'place in the home'. It leaves us to consider that the women of Cumann na mBan had exceeded their mission as auxiliary forces; they were allies in war with their fellow rebels, fighting on the front line. 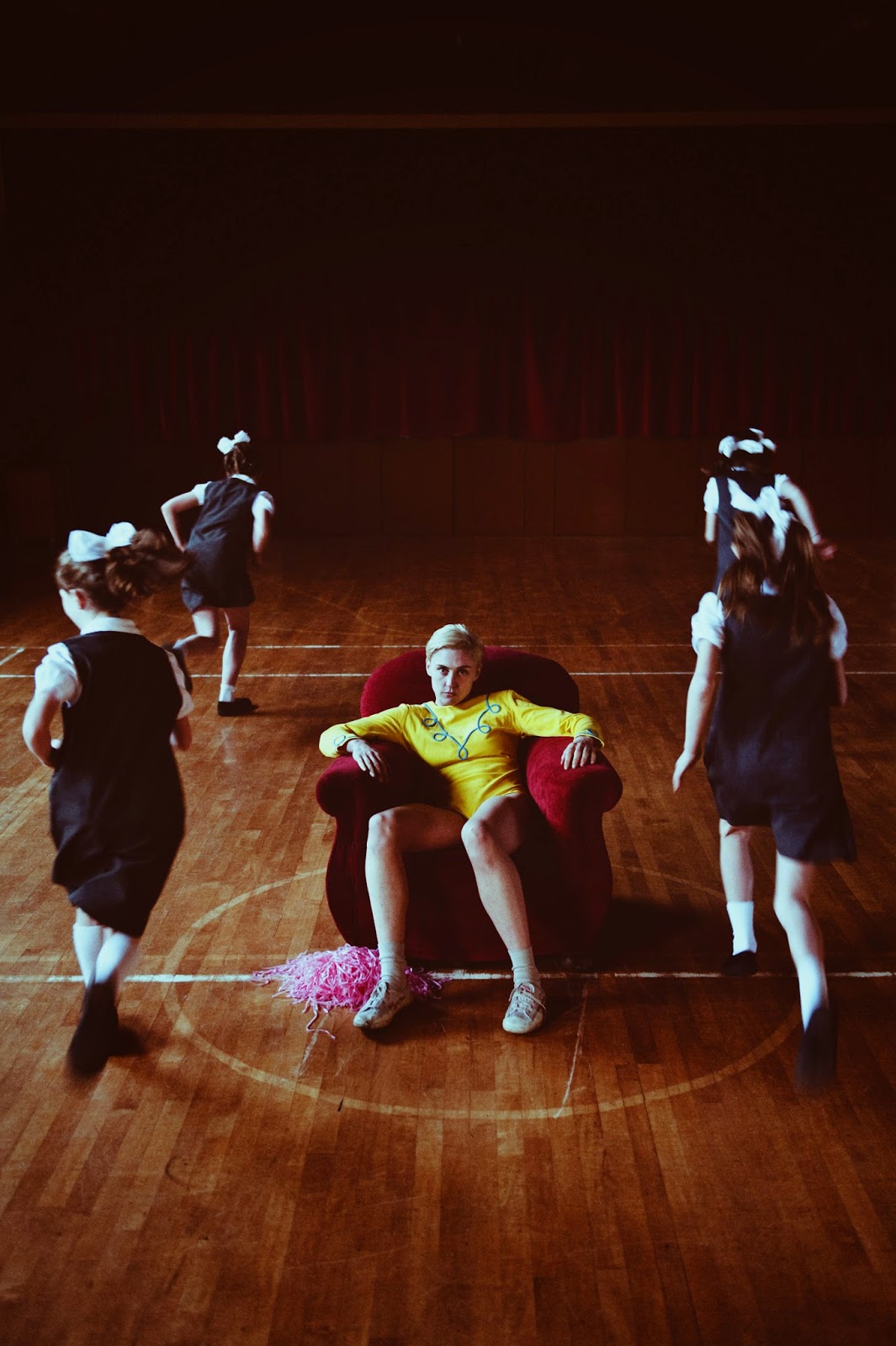 "Dance first. Think later. It's the natural order" said Samuel Beckett. Fittingly, the Dublin Dance Festival puts him through his paces in its 10th instalment (running May 20-31), having programmed work from the dramatist as well as contemporary artists both international and local.

Emma Martin Dance promises something "reminiscent of a David Lynch film" with festival-opener Tundra - a new work that explores the darker side of the self and its yearning for transformation and beauty. Martin has proved herself an acute observer of the rigidity and distances of social life, a politeness that her sensational work Dogs took great joy in eviscerating. Expect live music and elemental movement from the country's most exciting choreographer.

In addition, the Irish/North American company Arcane Collective visualise Beckett's world with Return to Absence, inspired by images from the trilogy of novels: Molloy, Malone Dies and The Unnamable.

The charming dance drama Swing debuted at last year's Dublin Fringe Festival, with actors Janet Moran and Steve Blount playing two dance students overcoming their nerves, both inside and outside the classroom. Its inclusion here goes to acknowledge just how skilful the performance is in its movement as well. "I would describe this as a duet rather than a two-hander" says Carruther. This former 'Show in a Bag' moves to the Peacock stage.

Comedy dance troupe Ponydance will be mounting their biggest show to date, Ponies Don't Play Football, having received standing ovations at the MAC in Belfast last October. Also, rising choreographer Philip Connaughton explores new territory with Tardigrade (which is the name for a type of water micro-animal).

Headlining the international contingency is Still Current by Russell Maliphant of the distinguished Sadler's Wells dance house. In Maliphant's fascination with the relationship between movement, light and music, he collaborates with the award-winning lighting designer Michael Hulls. This set of works at the Abbey Theatre includes the Olivier-nominated Afterlight - a portrait of the ballet dancer Vasalav Nijinsky. Carruther is proud that Still Current will also tour to Belfast, Limerick and Cork.

Expect to see dancers on the street with the Vienna-based Cie. Willi Dorner's Bodies in Urban Spaces. This moving trail through Dublin casts 20 local dancers to use the human body to illustrate urban architecture.


So what will you be seeing?


Posted by Chris McCormack at 10:17 AM No comments: 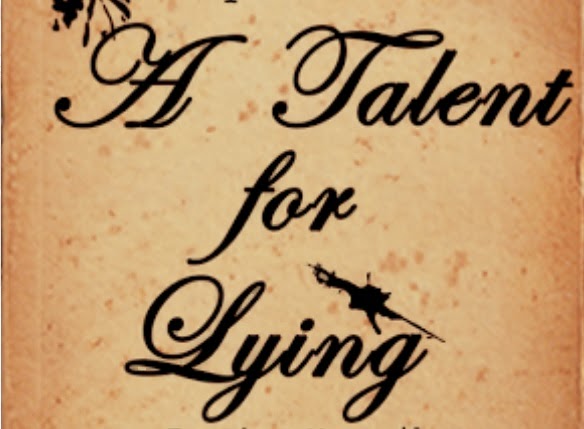 I caught A Talent for Lying by Liam McCarthy at the end of its run in Chancery Lane.

The play sees two scribes, Aidan and Lucy, meeting in a cafe. She's on the verge of emigrating and he's on the cusp of attempting to convince her to stay. It departs from its naturalist surroundings - perfectly fitted for the wine bar environs of the gorgeous Chancery Lane venue - to imaginings of their lives together.

McCarthy's scripts zips along to consider the preservation of ideas in art and, more hopefully, how artifice can push reality in certain directions.

Sarah Bradley's direction has its inconsistencies though. Fussy emphasis on a thudding sound design and ineffective visual projections take priority over attention to her actors. Darren Yorke chews the role for humour and, more importantly, the sweet innocence of an introvert. When he jumps to his feet to chaperone his companion through a fictional imagining, though, the confidence in his character feels like a leap. In addition, Sinead O'Brien's turn feels uncertain, bearing teeth at times and then downplaying elsewhere.

What did everyone else think?

Posted by Chris McCormack at 12:44 PM No comments: 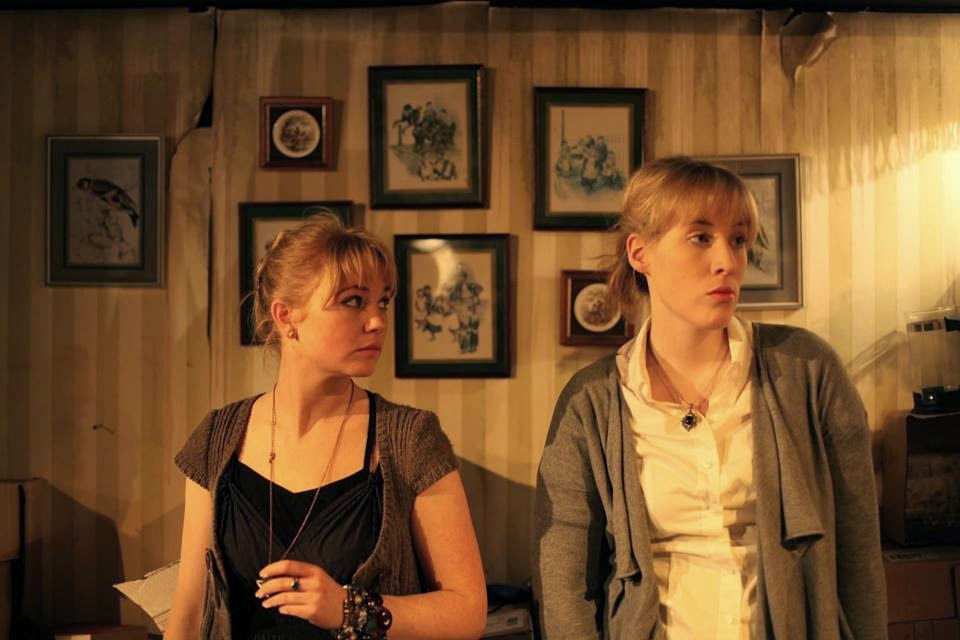 New play Slippers softly squeaks by but how can it raise the stakes?


I mostly enjoyed Slippers by Jeda de Brí and Finbarr Doyle, the first play as part of the Sickle Moon Productions residency at Theatre Upstairs.

The subject of compulsive hoarding, of the inability to discard objects of distress, is dealt with in this drama about two sisters sorting through the cluttered home of their just-deceased mother.

What's immediately striking is the set design, easily the most impressive I've seen in this venue. The wallpaper is peeling off the wall as the small performance area conforms to designer Aoife Fealy's realisation of a storage room chocked full of boxes.

The form sustains as the constant introduction of props and visuals, combined with strong performances and smart dialogue, keeps us engaged.

It succeeds in its subtlety, especially in Katie McCann's discreet reveal of a traumatised daughter. It's a shame then that it exaggerates towards the end, throwing at us wild provocations including a big description of the mother as a tyrant. It's too great a leap.

When Slippers trod softly it engaged but once it felt heightened I didn't buy it. It felt like it needed more restraint in raising the stakes.

What did everybody else think?
Posted by Chris McCormack at 11:51 AM No comments: