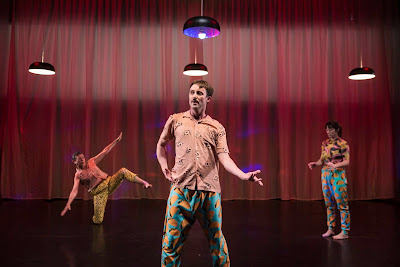 My review of Assisted Solo by Philip Connaughton coming up just as soon as my ex-boyfriend is a gynaecologist ...

Three dancers, stunning and knowing, extend and step as if invisible to each other. So begins Company Philip Connaughton’s absorbing new production about perfection, in which the choreographer’s radiant mother Madelaine, a woman suffering from advanced dementia, appears on film.

Choreographed in collaboration with the company, Connaughton’s own solo sees him spin elegantly one second and cheekily wag his finger the next. Comic touches lighten a serious subject, as if in a stealthy tragicomedy.

Dissonance may be slyly present at first, in the conflict patterns of Emily Ní Bhroin’s excellent costuming, but it’s eventually domineering, in an aching solo by Magali Caillet-Gajan that is at once resolute and confused, ending with her trapped by ordinary objects. Everyday life is transformed into something more difficult.

Though it feels over-choreographed in parts, this affectionate and surreal dance about elderly care challenges perceptions about the ageing body. “Would you like to dance?” someone asks Madeline. All that's needed is someone to show the way.

Posted by Chris McCormack at 10:26 AM