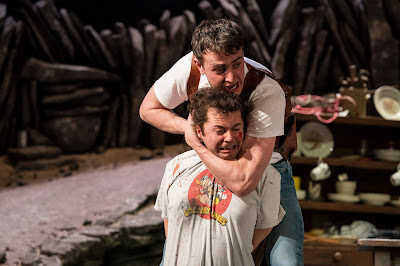 Martin McDonagh's dark comedy about a Republican terrorist is more ridiculing and subversive than ever. Photo: Patrick Redmond

Early in Martin McDonagh’s 2001 dark comedy, excellently revived by Gaiety Productions, someone offers a character description of Padraic, the eponymous lieutenant: “Didn’t the IRA not let him in because he was too mad”?

A free agent carrying out his own acts of terrorism, Padraic does tend to be unexpected and compelling (he is played by Paul Mescal). We first see him in Northern Ireland, stringing up a drug dealer who’s been selling marijuana to Catholic children. Padraic has removed some of the man’s toenails, and is now threatening to cut off a nipple.

Similarly, director Andrew Flynn and set designer Owen MacCarthaigh are making bold approaches to their own work. They haven’t put the drug dealer hanging in any ubiquitous warehouse, but against the “Free Derry” mural.

Flynn could have been accused of falling in with the establishment after last year’s safe and bloodless Gaiety production of The Cripple of Inishmaan. His McDonagh stagings for his own company, Decadent, had been edgier, nudging towards Grand Guignol-like horror.

But The Lieutenant of Inishmore, a Troubles satire that made producers nervous in the early 2000s, has been let loose on a subversive ridiculing spree. It allows for Flynn’s best work.

To see recent violence presented as satire can instil unease, but the production doesn’t shy away. When the rival criminal Christy justifies his reasons for plotting against Padraic, Cillian Ó Gairbhí brings the necessary elan to make Republican violence sound like a pointless vendetta: “A free Ireland is for the junkies, the thieves and the drug pushers too!"

Padraic is lured back to Inishmore when he hears about the death of his beloved friend Wee Thomas, who is a cat. (McDonagh is light on plot here, not that it matters).

Alex Murphy is the play’s dutiful foil. He’s wonderfully miserable as Davey, an innocent by-passer suspected in the feline’s murder. Padraic’s father Donny - an impeccably gruff and drunken Don Wycherley - tries the break the news to his son lightly.

Among those anticipating Padraic’s return is Mairead, a violent teenager carrying a shotgun, who, in Aisling Kearns’s performance, looks partly indebted to La Femme Nikita. Everyone is on fine form here. The knockout performances find the release in satirising serious material.

No one more than Mescal, whose Padraic is a sociopathic gun-blasting hothead one instant, and blubbering crybaby the next. He grumbles about Roger Casement, the Guildford Four, the heroics and injustices considered sacred by some, but Mescal’s superb parody is that these are compensating complaints made by an emotional wreck.

The production paces along to rock music. The cliffside backing of MacCarthaigh’s set smoulders from cloud grey to a red sunset. The stage becomes set for McDonagh’s spectacular gunfight. Some shots taken are risky, but they hit their target.

Posted by Chris McCormack at 2:09 PM