Mám review: A dance through Ireland’s subconscious without any coherent point 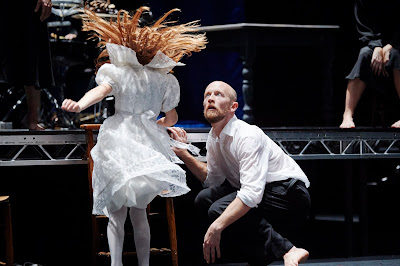 Michael Keegan-Dolan spent two years choreographing Mám, the new dance by Teac Damsa, in a Kerry Gaeltacht. A community hall at the foot of the mountain Cnoc Bhréanainn was the inspiration for him and the company. “This venue was a crucible for a musical and choreographic exploration of the spiritual and cultural powers that are emerging once again,” he says in the programme.

In his dances Keegan-Dolan has dwelled on old stories like Giselle and An Táin Bó Cuailnge, waded through their dark folky depths, and found new retellings that portray the savageness of modern Ireland. The result is often something between dance theatre and pagan ritual. His relocation to Irish-speaking Kerry, finding inspiration in a community hall “beneath the brooding slopes” of a mountain, has the adventure of its own folk story. (It recalls his collaborator Sabine Dargent’s mythical set for Sive, in which a rustic Irish dwelling extended and twisted into the inclines of a sinister mountain).

Mám begins like another pagan ritual. A concertina player wearing a goat mask (the revelatory composer Cormac Begley) sits before a young girl who is still and innocent, dressed whitely as if for Communion (Ellie Poirer-Dolan). The goat summons a group of dancers, charming in black dresses and ties, to celebrate her. Not since Mamillius in A Winter’s Tale has a child been so adored.

Keegan-Dolan has crafted a choreography that is at once ancient and contemporary. Against Begley’s inventive versions of traditional Irish songs, feet fall into old expected steps, while hands extend in playful shapes that wouldn’t be out of place on a nightclub floor. Dancers move between gestures in lithe folk movements, the yanked limbs and outstretched palms of a pagan dance.

But it isn’t clear what spiritual and cultural powers Keegan-Dolan is seeking. Chairs get pushed aside, freeing up the community hall for melancholic figures to lean into intimate embraces and get pulled apart. One gleeful dance gathers all the women and sends them circling. A man in some drunk-like haze still shuffles to the airs of an old song, in James Southward’s skilled performance, before retreating beside the girl. He's fraught with complicated life while she kindly shares the Tayto bag. Resembling scenes from some dramatic community gathering, Mám seems more interested in nostalgia than anything.

But that doesn’t help us as the dance digs deeper, peeling away the curtained ascents of Dargent’s near-otherworldly set, and ushering in s t a r g a z e’s unsettling disharmonies. Dancers spin with distress at length. They hold each other close and flash with frustration and violence. There are long stretches that are without any context, and difficult to read.

Part of Keegan-Dolan’s appeal is his ability to rummage through Ireland’s memory-scape and give familiar iconography poignant new resonance. His much beloved dance Swan Lake/Loch na hEala used allegorical costuming and attractive stage effects to bring catharsis to recent agonising revelations of child abuse and suicide. Few people linger on how, as a version of Tchaikovsky’s ballet, it ended up focusing more on the prince than the princess, or if they walked away with any memorable choreography.

Most choreographers would focus on using movement to make a coherent point, from start to finish. But in Mám Keegan-Dolan prefers to recombine familiar images in brief solos and duets that barely get time to evolve before they’re swamped by group movement. The arcs of those dancers aren’t as important as the audience's registering of old references, putting them on our own past romances and heartbreaks. That can be deeply affecting, drawing on a nation’s social history, but it doesn’t necessarily make a dance complete.

The incoherence is conspicuous when you consider the dance's source. Keegan-Dolan’s choreography lives in Ireland’s subconscious, at the foot of a Kerry mountain. Its nostalgia is sweeping, but it can also be slippery, and not always attached to telling a good story.

Posted by Chris McCormack at 9:03 AM