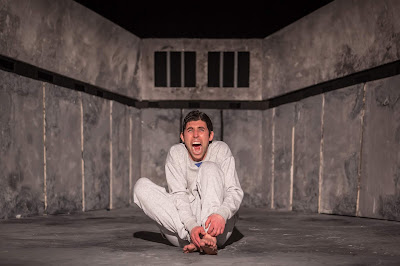 
Sometimes theatre has unfinished business. It’s easy to look at Bernard Shaw’s Misalliance, for instance, and see that comedy about an uncertain marriage engagement as a continued exploration of his earlier play Getting Married. The two are often described as “companion pieces”.

Different plays may complement each other or share the same world but it can take nerve putting them on in one sitting. Imagine being spun through The Walworth Farce and then arriving almost immediately at The New Electric Ballroom. Such is the kind of audacity shown by director Karl Shiels, staging Theatre Upstairs’ most ambitious production to date, in association with the Abbey Theatre.

If there’s anything clear about pairing Philip Ridley’s two companion plays - Tonight with Donny Stixx, a dark comedy about a fame-obsessed magician, and the startling drama Dark Vanilla Jungle - it’s that both offer portrayals of vulnerable youths. But by staging them within Naomi Faughnan’s stark set, its walls narrowing eerily towards the barred window of some asylum, Shiels seems to be pushing the two monologues towards art-horror.

That’s certainly in Rex Ryan’s favour, who gives his best performance as Donnie, an intense teenager giving a public interview interrupted by unheard questions. Donnie’s pleasing discovery of magic and obsessive pursuit of celebrity may be seen against despairing signs of a family falling apart through depression and alcoholism, but in Shiels’s production it affords Ryan, an actor who rarely stands still, the bravura from a more exaggerated thriller. His Donnie rages from soft-spoken prudishness to furious indignation, split between delusion and reality.

Similarly, the young woman in Dark Vanilla Jungle, Andrea, is gripped by fantasies, recalling the details of her parents’ first meeting as if it were a fairy-tale. Given to the meticulous Katie Honan, Andrea is self-destined for romance but becomes the victim of horrific assault. If Ridley allows a more comforting illusion here - a utopian island discovered on a family holiday - Shiels makes sure we snap back to reality.

The production prefers to shut down such escapism as if the director, subtly extracting images from the scripts with lighting designer Eoin Byrne, insists more on the transient guardians, sick relatives and obsessive distractions of both plays like they were patterns of deprivation.

That horror is real and unsettling but it’s difficult to take the rapid details over nearly three hours. In a single setting these aren't ideal companions.

Posted by Chris McCormack at 9:39 AM