Bodies of Water review: An arty play-installation but a shallow exploration of grief 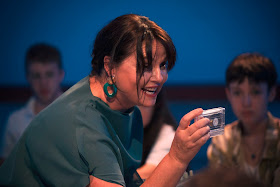 A curator holds a retrospective of her missing partner's artwork in this new play-installation.

The most obvious question that can be asked about Bodies of Water - the new play-installation by Eoghan Carrick, Maeve Stone, Jonah King and Úna Kavanagh - is: who is it about?

Ira Dean is an unknown artist who vanished at sea 10 years ago while working on an artwork about the North Atlantic garbage patch. Her art is undeniably feminist, and preoccupied with depicting the effects of climate change. In Bodies of Water, her partner Jan (portrayed by Kavanagh) guides us through a retrospective of Dean’s work.

The pith of the production’s marketing - and even one promotional interview with King - would have you believe that Dean was a real person. Yet, if you search for her online you’ll find nothing. It’s more likely that she is an avatar for the production’s creators, who seem to be searching for a way to bring poignancy to the climate crisis. (If the pretence that Dean is real sounds contrived, keep reading).

Úna Kavanagh’s nervously affectionate Jan introduces us to the artworks one-by-one, interpreted here by Jonah King’s absorbing video design. One projection sees the young Dean (Maria Oxley Boardman) writhing in a waterhole as emerald green plastic bottles float nearby. Inspired by an aunt whose health is slipping away, the artwork is a grim comment on how plastic outlives the body.

Maeve Stone’s arty script is embellished with such theory, but it also weaves in some details about Dean’s history with Jan, such as how their romance lit up in art college. It’s a similar structure to Lynda Radley’s play Berlin Love Tour, which also had a solo narrator, a tour guide, whose personal wreckage is as important as the topic she’s talking about. But there isn’t enough characterisation in Stone’s script to create an impact. It isn’t clear why a distance widened between Jan and Dean, except for the vague sense that the latter had become too obsessive and difficult about her work.

Without dramatic escalation in the plot, Bodies of Water instead jumps the shark.

Kavanagh is one of our best performers suited to understated realism, and she relies on such subtleties to convince us that the production is having an unfortunate technical difficulty. The video projections disappear, forcing Jan to become panicked and flustered. It’s a scene elaborately designed to rouse sympathy, in a production already spinning several levels of manipulation - one of which is the ambiguity of whether its central character is real or not.

Jan resolves to bring Dean’s art to us, carrying out boxes containing sculptures and figurative drawings, and recreating the chaos of her studio. Eoghan Carrick and Cillian McNamara’s sublime blue lighting arrives for the final reckoning, but the exploration of grief is still in shallow waters.