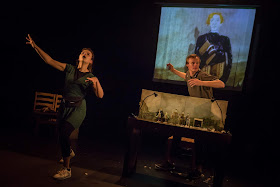 A couple stumble across an old man with wings in Gabriel García Márquez's story for children. Photo: Ste Murray

Mention the Columbian novelist Gabriel García Márquez - whose short story for children A Very Old Man With Enormous Wings has been adapted by Collapsing Horse - and someone’s bound to bring up the fiction genre of magical realism. Interruptions by ghosts and magic carpets in mundane scenes might thrill, but Márquez knew well that its strength lies in anecdote. The arrival of an otherworldly being is simply the set-up for all-too-real events that follow.

The plot follows a couple, Elisenda and Pelayo, whose house is invaded by crabs. As narrator, Genevieve Hulme Beaman brings her surreal style of performance - the childishly severe characters, grave accents and diva-like aplomb - but there may also be shades of Elisenda, who first appears highly-strung and worried about her baby’s safety. It could also be said that Manus Halligan, quietly and fussily arranging the stage, resembles Pelayo, dutifully trying to rescue their home.

Elisenda and Pelayo stumble across an old man with wings, lying helplessly in the mud. They lock him in their farmyard, which, depicted in Andrew Clancy’s spooky puppet theatre, becomes a popular attraction. Crowds of gawkers come to see the man who looks like an angel, asking him to save them. Live video projection brings the screwy puppets up close, chanting in Alma Kelliher’s haunting music.

In these darker moments, Collapsing Horse find the depth of Márquez’s story, depicting the mistreatment of an elderly prisoner. His cage gets hot from candles. Crowds pluck his feathers and even sear him with a branding iron. When Elisenda and Pelayo discover they can charge an entry fee for crowds to see the old man, the production delivers a deranged song about selling merchandise.

Earlier on, the narrators told us “there is no lesson” in in the story of the old man. This turns out to be the downfall for Elisenda and Pelayo’s business, as a nearby carnival attraction with a more cautionary message ends up stealing their audience. Collapsing Horse might share that scepticism; their past play for young audiences, Human Child, an adventure into an Irish fairy world, didn’t have a cleanly cut moral about aging or holding on to your imagination - you can do both.

Magic may not be the most important thing in Márquez’s story, but it does allow for a satisfying coda. Watch the sublime production take flight, only after showing what really matters.